Piknik z niedźwiedziami / A Walk in the Woods 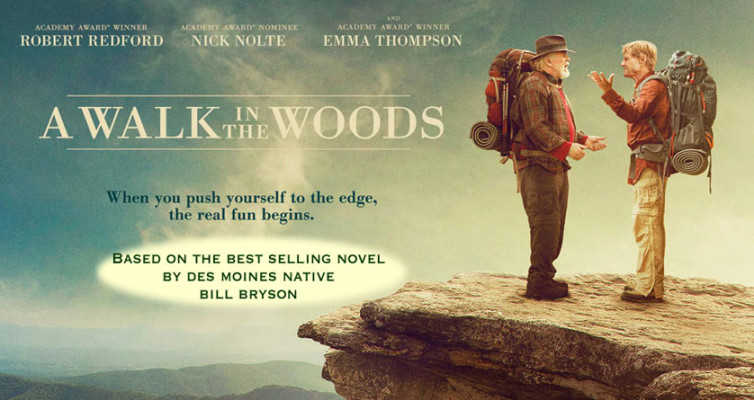 – Author Bill Bryson (Robert Redford), after living two decades in Britain, returned to New Hampshire. Now in his late 50s or early 60s he has lived there peacefully for the past ten years. A television interview reports that he has published several popular books and there is speculation he will be writing more. Bryson, however, has no such plans.

Bryson and his wife Catherine (Emma Thompson) attend a funeral. Not being an outgoing person, he afterwards takes a stroll on the nearby Appalachian Trail. He suddenly decides he will hike its entire length. Catherine objects, presenting all kinds of accounts about accidents and murders on the trail. She relents on condition that he not travel alone. He agrees and searches for a friend willing to join him. Everyone declines his invitation; some declare him insane. Finally, he is contacted by Stephen Katz (Nick Nolte), an old friend who offers to be a hiking companion. Despite appearances, Stephen claims to be fit enough for the challenge. Bill’s wife is unhappy with his choice, but relents.

Within less than a mile of their departure point, as groups of hikers overtake and pass them, they begin to grasp the difficulty of their ambition. Shortly after, a group of young children effortlessly runs by them up the trail, laughing and calling out to each other. Seeing others pass by so easily motivates them to carry on. And so they move on, day by day, making more or less pleasant acquaintances, having more or less pleasant experiences. Some time later they reach a hut, having hiked miserably through pouring rain. Carved into the log wall is an Appalachian Trail map showing the trail and their present location. They realize they have only finished about one third of the trail after spending three months on it. Eventually they trek into a restricted section posted „for experienced hikers only”. While maneuvering their heavy and awkward backpacks alongside a precipitous drop, Bill trips and pulls Stephen with him down a steep, rocky cliff. They fall about fifteen feet onto a ledge spacious enough to be comfortable, but far enough below the trail to be unable to get back up to resume the hike. They spend the night there with no clear hope of rescue. Luckily, the next day they are awakened by early morning hikers who are able to get them off the ledge.

Eventually, they decide they have had enough and end their journey. When comfortably back at home, Bill, going through his mail, finds a series of post cards from Stephen that were mailed from their various stops along the trail. The last one reads: „What’s next?' Bill sits down and begins typing on his computer, „A WALK IN THE WOODS.”