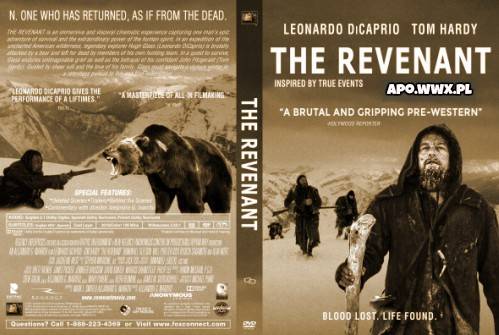 PLOT – The film begins with a 1823 quasi-military hunting party of trappers and hunters hunting for pelts in the unsettled wilderness of the Louisiana Purchase under the command of their Captain Andrew Henry. Hostility from the Native American Arikara Indians leads to an ambush of the hunting party. Only about half of the hunters manage to escape on one of their rafts, salvaging as much as they can while still under fire from the attacking Arikara.

The escaping hunting party is led by Henry who knows that they are still being pursued by the Arikara. The party is further slowed down when Hugh Glass, one of the experienced hunters, stumbles on a mother grizzly bear and her cubs while he is separated from the rest of the party. He is mauled and seriously wounded by the enraged grizzly wildly protecting her cubs. Although Glass eventually gets off a gunshot and kills the bear with his knife, but by then he is nearly dead himself and the hunting party can only provide rudimentary medical care. The party takes the wounded Glass with them, but because he is on a makeshift stretcher he slows their march. Finally one of the party, John Fitzgerald, suggests they kill him so they can move faster. Henry initially tries to kill Glass himself but is unable to shoot him. Instead, he offers payment for several men to stay behind with Glass. When two boys (Hawk, Glass' son, and Jim Bridger) volunteer, Fitzgerald points out the likelihood that those boys and Glass will be killed – leading the boys to decline and the captain to up the reward, so much so that Fitzgerald himself volunteers. The captain makes Fitzgerald promise that he will stay with Glass until he dies and give him a proper burial. Once separated from the main hunting party and alone with Glass, Fitzgerald tries to kill Glass (who is so wounded that he can’t even speak) by smothering him, only to have Hawk stumble upon this murder attempt. A struggle ensues and Fitzgerald kills Hawk. When Bridger returns Fitzgerald claims he doesn’t know where Hawk is, and then concocts a story that he saw Arikara down by the river and they need to abandon Glass.

Henry and the surviving hunting party are the first to return to their dilapidated barracks outpost, where eventually Fitzgerald and Bridger return. Fitzgerald tells Henry that, despite heroic efforts, they could not save Glass or his son from the elements. Fitzgerald receives a cash reward for his fabricated tale from the unsuspecting Henry. Meanwhile, Glass crawls and struggles to walk through the woods for days. He builds fires and eats roots. He is also tracked by hostile Indians, whose chief is looking for his kidnapped daughter Powaqa. Glass escapes a close encounter with them by floating down rapids. He then encounters a friendly Indian who feeds him raw bison. The two travel for a bit, and the Indian builds Glass a shelter one night during a blizzard. Glass awakes to find the Indian hanged, with a group of French frontiersmen camped nearby. Glass rescues the Arikara Chief’s daughter Powaqa from her captors and manages to escape alone by stealing a horse. Afterwards, he again escapes hostile Arikara Indians by jumping off a cliff, which kills the horse and wounds Glass even further. Glass keeps warm for a night inside the body of the dead horse. As the weeks go by, back at the outpost, a desperate lone frenchman is found carrying Glass' canteen. Most believe the hunter stole it from Hawk not far from camp, so they organize a search party and instead find Glass alive. Meanwhile, Fitzgerald decides to flee from the outpost, after first emptying the outpost’s payroll safe to which he has had access, and before Glass can completely discredit Fitzgerald’s false heroic claims made previously to Henry.

Glass requests that Henry assign him and only him to bring back Fitzgerald dead or alive, and Henry agrees but goes with Glass. Fitzgerald ambushes Henry and kills him when Glass separated moments earlier. Glass returns to find a deceased Henry after hearing gunshots. He knows Fitzgerald is close. Glass sets an ingenious trap for Fitzgerald by placing Henry upright as a mock heavily-clad dummy rider on a traveling horse dressed in Glass’s coat, while simultaneously hiding himself with a loaded gun under the pack blankets on a companion pack horse trailing directly behind acting as the dead Henry. In the wilderness now, Fitzgerald takes the bait and shoots Henry posing as Glass off the horse from a distance. Fitzgerald goes down and checks the body, only to discover it is Henry, not Glass, when Glass suddenly drops out of the pack horse blankets to shoot Fitzgerald, hitting him in the shoulder, Fitzgerald flees with Glass in close pursuit and face off in a river bank. Glass fights and nearly kills Fitzgerald, but instead pushes the heavily wounded Fitzgerald down stream and into the hands of the approaching Arikara. The chief, now accompanied by his daughter Powaqa, kills Fitzgerald. As the film ends, Glass continues to have flashbacks about his deceased wife and his deceased son, which have haunted him throughout the film, even after his culminating revenge on Fitzgerald has been completed.