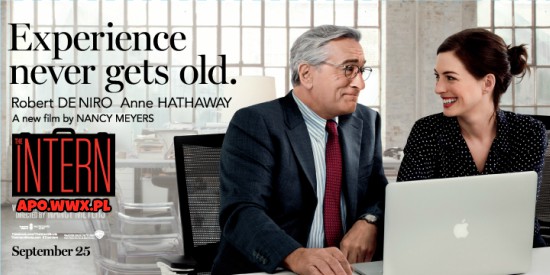 PLOT – 70-year-old widower Ben Whitaker (Robert De Niro), a retired executive at a phone directory company, applies to a senior citizen intern program after retirement has gotten too boring for him. The company he applies to is About the Fit, a fast-growing e-commerce fashion company, whose founder and CEO Jules Ostin (Anne Hathaway) had previously agreed to a community outreach program where seniors will intern at the firm. Ben impresses everyone and is one of four hired.

Ben is assigned to work with Jules, who is somewhat skeptical of him at first. Initially frozen out by Jules, Ben slowly wins the office over with his likeability and one day, after clearing the office junk table, gets into Jules’ good graces. One day, Ben notices Jules’ chauffeur drinking outside his parked vehicle. He convinces the driver to go home early and drives Jules home himself, a role he retains when the chauffeur is nowhere to be found the next day. Ben eventually reveals that he once worked in the very same building where About The Fit is now based as well as developing a romantic relationship with the in-house massage therapist, Fiona (Rene Russo) and becomes something of a father figure to the younger workers. He is very committed to Jules, and even breaks into the house of Jules’ mother with his band of co-workers to delete an embarrassingly scathing email that Jules inadvertently sent her. Ben also gets to know Jules’ family. Her husband, Matt (Anders Holm), gave up his own high flying career to be a stay-at-home dad to their daughter, Paige (JoJo Kushner) when About The Fit started to take off. However, their marriage is shown to be slowly breaking apart over Jules’ long hours, mainly caused by her very hands-on management style.

Meanwhile, Jules is under pressure to give up her post of CEO to someone outside of the company as her investors feel that she is unable to cope with the workload, having grown About The Fit from a startup founded in her kitchen to a 220-employee juggernaut in only 18 months. Believing it will give her more time at home with her family, Jules is willing to consider the offer. While driving Paige home from a party, Ben discovers that Matt is having an affair with another parent at Paige’s school. While on a business trip in San Francisco to interview a potential CEO candidate, Jules reveals that she knows about Matt’s cheating as well.

In an effort to buy herself the time to repair her marriage, Jules decides to hire a prospective CEO from San Francisco. When Jules goes to Ben’s home the next day, Ben greatly encourages Jules to think about how much this will change her authority and how her creativity may be tampered with and also reminds her of her passion for her company. Matt unexpectedly drops in at the office and urges her to reconsider, saying that he is willing to make their marriage work. Jules goes out looking for Ben wanting to tell him that she has changed her mind and finds him obviously enjoying his Tai Chi exercise group. She finally lets herself relax and joins him.