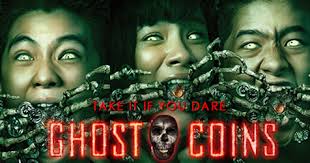 PLOT – There is a belief in Thailand which requires relatives to put coins inside the mouth of the deceased so that they can move on to the afterlife. However, there is a group of reckless and irresponsible teenagers who keep stealing the gold coins from the deceased. Consumed by their own greed, the teenagers then set out to steal from a millionaire’s corpse who had a mouthful of gold coins and their action somehow angers the dead man. Later, the group of teenagers then encounter various horrifying situations as the spirits of the man returns to haunt them.