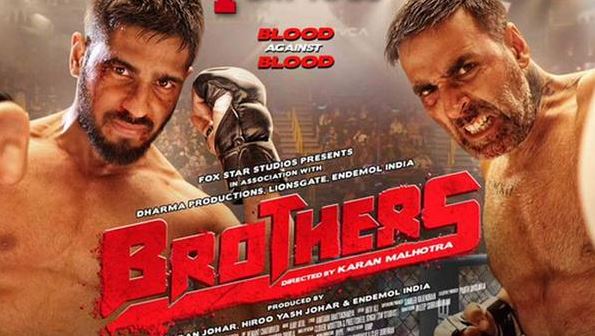 PLOT – The film opens in medias res where street fighting issues are raised in Mumbai. Sports chairman Peter Braganza (Kiran Kumar) expresses his desire of making street fighting a legal sport and decides to open a league called Right 2 Fight (R2F). Meanwhile, in prison, Garson „Gary” Fernandes (Jackie Shroff), a recovering alcoholic, is released from his jail term and his younger son Monty (Sidharth Malhotra) comes to pick him up. Monty gets angry when his father asks about his elder son David (Akshay Kumar) and takes him away to their home. At home Gary acts protective of all the belongings of his wife Maria, who died many years ago. While his elder son David, now a physics teacher, has a daughter suffering from a kidney disease. Unable to arrange money from bank and other sources he arranges money through street fights. This enrages his wife Jenny (Jacqueline Fernandez) as she is worried about David. Meanwhile, Gary, who misses his wife Maria (Shefali Shah), starts hallucinating about her. Gary then tries to meet David but the latter ends up throwing Monty and Gary out of his house in rage.

Monty is then revealed to be Gary’s foster son, rather an illegitimate child. Maria nevertheless loved Monty, and he was loved by David (Meghan Jadhav) who was an overprotective elder brother. The two brothers had a close, loving relationship when David was aged 18 and Monty was aged 14. One night on Monty’s 15th birthday, Gary came home drunk and apologized to Maria for destroying the family but instead of Maria he says his lover’s name. This enraged Maria. And when Maria confronted Gary about this in private and expressed her anger at having to tolerate his mistakes and put up with his behaviour. In a drunken stupor, Gary accidentally hit Maria as David runs and pushes Gary aside as he is extremely enraged at Gary for what he did to Maria as she dies due to the injury in front of David and Monty. As she breathed her last, she also stretched her arm out to Monty; when Monty came near Maria, David angrily pushed him away and blamed him for Maria’s condition. This created a rift between Gary, Monty and David.

David later loses his job as school principal Shobhit Desai (Kulbhushan Kharbanda) is perplexed after learning about David’s involvement in street fights and his daughter’s disease. Monty, who wants to be a fighter, is then introduced by Suleiman Pasha (Ashutosh Rana), a fight agent. Suleman fixes a match with Mustafa in which Monty gets defeated. This enrages Gary and Monty decides a rematch with Mustafa, where Monty defeats Mustafa and is declared a selected fighter of R2F by Peter. The fight gets recorded and uploaded onYouTube and soon Monty becomes an internet sensation. Monty undergoes training to be a champion in R2F. Meanwhile, David too decides to be a full-time fighter and Jenny encourages him to do so. Suleiman trains David and fixes a match while Monty celebrates his victory at a bar. David soon is victorious in the fight. Peter gathers fighters from all over the world to compete in R2F. R2F soon becomes a sensation and receives much appreciation. Soon David and Monty defeat their opponents and make their way to the finals and the fight ensues.

Gary, feeling guilty, leaves the arena as he thinks that he is responsible for the conflict between the brothers. Pasha advises him to not let his relationship with Monty get in the way of his win. The match begins. Both David and Monty put up a strong fight, however David eventually ends up breaking Monty’s shoulder. He immediately shows care and checks on his younger brother, but Pasha keeps telling him to keep fighting and not care about Monty’s arm. Gary rushes to David and apologizes for his mistakes. He asks David to not take out his anger towards him on Monty, and reminds him that Monty is his brother. David, already conflicted, turns to Monty and envisions kid Monty instead. Monty, on the other hand, agrees to continue the match despite a broken shoulder and blurred vision. The match continues. David overpowers Monty once again. While David keeps Monty pinned to the ground, he asks Monty to stop fighting because „he can’t hit Monty any longer.” Monty, in turn, says that David definitely can continue. He says that David has always only thought of himself as he deserted Monty out of anger once Maria died. David is overridden with guilt and sorrow; Monty’s comment brings him to tears as he apologizes. Seeing this, Monty surrenders the match. Monty reconciles with David and the latter takes Monty away in his arms.