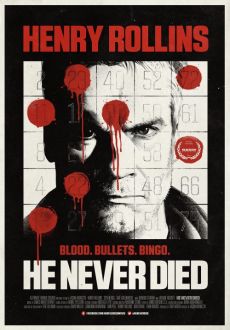 PLOT – Jack (Henry Rollins) has developed a routine for his life that he sticks to in order to avoid giving into the impulse to engage in cannibalism. He stays away from society other than occasional trips to local diners, bingo games, and to the hospital, where he purchases blood from a hospital intern, Jeremy (Booboo Stewart). After returning from one trip Jack is confronted by the mobsters Steve and Short, who are looking for Jeremy.

Jack’s routine is further interrupted by his ex-girlfriend Jillian’s revelation that he has a daughter named Andrea (Jordan Todosey), who had earlier tried to contact him. Unhappy, Jack agrees to locate Andrea but stresses that he wants no further contact with Jillian. He finds Andrea and takes her with him to his favorite diner, where she meets Cara (Kate Greenhouse), a waitress with a crush on Jack. While Jack slowly bonds with Andrea he begins to see visions of a man with a goatee and also manages to foil Steve and Short’s attempt to kidnap Jeremy. He’s surprised when he discovers that Andrea can also see the man, as previously only Jack could see him.

Out for vengeance, Short and Steve try to murder Jack, only for the man to kill and eat Short. Afraid that he’ll do the same to Andrea, Jack forces her to leave the apartment. Shortly afterwards Jack goes out and picks fights with various people, culminating in him killing three people. Jack ultimately receives a phone call from the mobsters, who inform him that they have kidnapped Andrea and will kill her if he does not surrender. Jack tries to confront Alex (Steven Ogg), the man he believes is responsible, only for Alex to deny that he had anything to do with the kidnapping.

Upset, Jack goes to Cara’s diner, where he bribes her into helping him save Andrea by offering her a million dollars. She helps him interrogate Steve, during which time she discovers that Jack is actually the Biblical figure Cain, forever doomed to wander the earth as a flesh eating monster for killing his brother Abel. Jack ultimately discovers the reason why the mobsters were after Jeremy: he had borrowed a large sum of money without repaying it. He also learns of Andrea’s whereabouts and goes to rescue her. Just as he’s about to murder Alex, the man with the goatee arrives, prompting Jack to angrily confront the other man over his punishment for murdering Abel. Jack ends up choosing to spare Alex, promising him that one day Alex will see the goatee man, just before he leaves with Cara and Andrea.