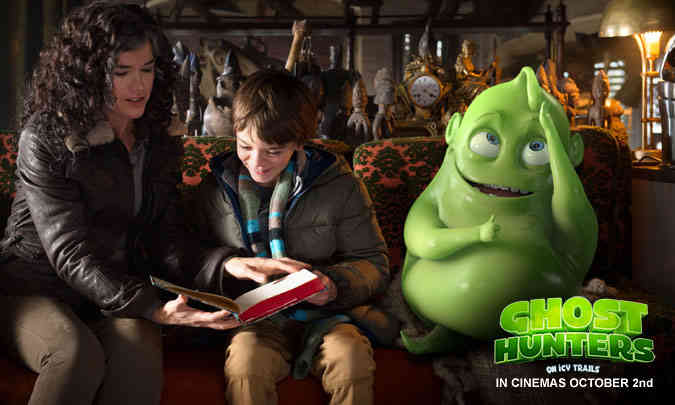 PLOT – The Thompson parents are worried, because their eleven year-old son Tom often daydreams and is scared of lots of things, especially the dark, damp cellar beneath their apartment. Not entirely without reason, because it’s there that one day he meets a bright green, slime-dripping ghost: Hugo is an ASG, an Averagely Spooky Ghost, but completely harmless and totally loveable – even if he is quite a handful as soon becomes obvious. But Hugo has a serious problem: a very dangerous Ancient Ice Ghost (AIG) has chased him out of his old house and now haunts it. This situation is a catastrophe for Hugo, because if he doesn’t get back to his old haunt by the next full moon, he’ll vanish forever. Tom wants to help Hugo and becomes friends with the clumsy ghost. Luckily the Central Ghosthunting Institute (CGI) has fired their best, if not always particularly nice ghosthunter: Hetty Cuminseed. She’s simply not a team-player, says her boss, and there is only a limited need for old-school ghosthunters. Tom asks Hetty to help his new friend Hugo. Even Hetty, who is usually immune to sentimentality when it comes to ghosts, is touched by this unlikely friendship. She agrees to rid the haunted house of the AIG. Realising she can’t defeat the powerful ghost alone, she requests help from the CGI ghosthunters. They have to act fast, because the ghost in the house is a real threat to the entire town. But the head of the CGI doesn’t take Hetty seriously and refuses to work with her. She makes it crystal clear that only CGI ghosthunters are allowed to fight against ghosts, and Hetty has been fired. While the CGI ghosthunters are on the wrong track and still believe the AIG is hiding in Hugo’s house, the ice ghost has found its way directly to their headquarters. A special team is born – three ghosthunters of the most unusual kind, who prove themselves through friendship, courage and self-confidence in the fight against the evil ice ghost: a scaredy-cat boy, a professional ghosthunter, who doesn’t like children or ghosts, and Hugo, a clumsy, slimy blob.