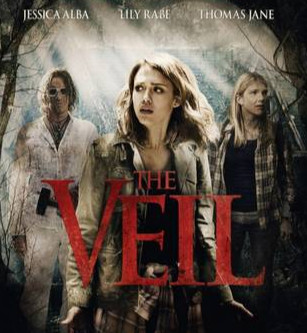 PLOT – Twenty five years after members of Heaven’s Veil, a religious cult, commit suicide, documentary filmmaker Maggie Price contacts the sole survivor, Sarah Hope, to film a documentary about what really happened. Sarah, who was five years old when she was found at the scene, accepts when she learns that Maggie has found evidence that never-recovered footage exists. Maggie’s brother, Christian, explains that their father was the FBI agent who led the investigation. Shortly after discovering the mass suicide, he committed suicide, driving Maggie and Christian to learn the truth. With her crew, Maggie takes Sarah to the site of the cult’s suicide.

They shoot footage of Sarah’s reaction to coming back and are concerned when she collapses, overwhelmed by memories and ghostly visions. After they set up camp for the night, Sarah wakes from a nightmare to find that the crew are looking for the grip, Ed, who has disappeared with their van. Ann, the sound editor, and Nick, the gaffer, leave to find Ed. The others follow Sarah, who has remembered the location of a house hidden within the forest. Inside, they find the lost footage and missing cult member Karen Sweetzer’s decomposed corpse. In a tape found near her body, Karen rants about not being controlled and briefly addresses Sarah before dying.

After repairing the projector, they begin watching the remaining footage. In it, Jim Jacobs, the leader of Heaven’s Veil, describes how he has uncovered the secret to eternal life. By designing drugs with his knowledge of alchemy, he hopes to free his followers' spirits from their bodies. They also learn that Karen is Sarah’s mother. Sarah experiences further visions when she talks to her mother, confessing that she feels conflicted about returning. Ann and Nick return, only to reveal that Ed has died in a high speed car accident. Jill, the sound editor, argues they should leave, but Maggie and Sarah insist that they continue watching the tapes. The others reluctantly agree.

In the later tapes, Jim experiments with dangerous drugs to help him temporarily cross over to the spirit realm. During one trance, he possesses a cult member and announces that he has freed the first of three bindings from her soul. Ghosts kill Nick when he leaves to restart the house’s generator; he later rejoins the others and kills Ana when they are alone. Ana and Nick return together to continue watching the tapes. Jim reveals further experiments in the footage, where he administers poison to himself. He removes the second binding from his soul, then returns once the antidote is applied to him.

After hearing ghostly whispers, the remaining documentary filmmakers become convinced that the house is haunted. Jill and Matt, the cameraman, leave. They find Ed apparently alive. As Jill applies first aid, Matt leaves to get help. Ed kills Jill, and they return to house. Sarah holds a seance to communicate with her mother, who demands that she entice the documentary filmmakers to stay at the house. Sarah murders Christian, who rises and joins her to continue watching the footage with the others, all of whom but Maggie are now possessed.

In the final reel, Jim reveals that the poison administered to the cult members was supposed to be counteracted by an antidote. Karen objects to giving poison to the children and allows Sarah to flee. Jim is revealed to be Sarah’s father and forces Karen to take the poison when she resists. Karen leaves with the footage for the house, where she dies. Before the cult can administer the antidote to themselves, the FBI arrive and interrupt the ceremony. Denied the antidote, the cult members all die. In the present, Sarah reveals that the cult members have possessed the documentary filmmakers, and Jim, possessing Ed, nails Maggie to a tree despite her protests that her father did not know about the antidote. The police arrive with Matt, only to be killed by the cult members, who now possess their bodies, too. Jim announces his plan to feed upon the souls of the rest of the world.