The film starts with a funeral of Macbeth’s and Lady Macbeth’s child, with both parents grieving for their loss. Macbeth, who supports King Duncan in the civil war, is leading royal troops into a final battle. Macbeth emerges victorious, but with heavy losses, including many boy soldiers. The battle is observed by three women with a small girl and an infant. They approach Macbeth and Banquo, hailing Macbeth as a Thane of Cawdor and future King, and Banquo as a father of Kings, before disappearing in the mist.

Elsewhere, Duncan hears about Macbeth’s victory and is brought the Thane of Cawdor who, deemed to be a traitor because he has allied with Norse invaders, is stripped of his title and executed. The King orders his servants to take the title of Thane of Cawdor to Macbeth, who reacts uncertainly. He sends a message ahead to his wife, Lady Macbeth, telling her about the witches’ prophecies. Lady Macbeth then prays to the dark spirits in the village’s church asking them for guidance. When Macbeth and his soldiers return, and her husband tells her that Duncan will stay one night as their guest, she urges Macbeth to kill the King to fulfill the prophecy from the witches. Duncan arrives to the village and a feast is being held, where the King pronounces Malcolm as his heir. Macbeth still hesitates and Lady Macbeth persuades him to commit the deed, while she slips a sleeping potion to the King’s servants. After the feast ends, Macbeth sees a ghost of one of the boy soldiers who had been killed during the battle who gives him a dagger and leads him towards Duncan’s tent. Macbeth follows and brutally slays Duncan. Malcolm enters the tent and seeing what Macbeth has done, flees in fear. Shaken, Macbeth goes to his wife and gives her the daggers he used to kill the King. Lady Macbeth rebukes him that he should leave them in the tent and goes herself to place the daggers in the hands of the sleeping chamberlains. Later she meets Macbeth in the church where they both wash their hands from blood and with Lady Macbeth telling him that the water has washed their deed away.

In the morning, Macduff enters the tent to wake Duncan, only to discover that he is dead. Macbeth summarily executes the sleeping servants to prevent their confession. Macduff and Lennox, a Scottish noble, discuss that as Malcolm has fled to England that puts him under suspicion of being involved in the murder. They also admire Macbeth’s justice on the supposedly-treacherous servants in the rightful fit of anger. With Malcolm gone, Macbeth is asked to become King of Scotland. After the coronation he sits in a sour mood in his chamber where Lady Macbeth comes to him. He complains that killing Duncan was for nothing as he has no heirs to inherit after him and that the crown will pass to Banquo and his son according to the prophecy. He invites Banquo with his son to a banquet and finds out that they both plan to leave. Seeing how Banquo is becoming suspicious, Macbeth sends three assassins to murder him. Banquo is killed, but his son escapes to the woods.

During the evening, Macbeth is waiting for Banquo to arrive and makes a comment about him not keeping his promise to show up for the feast. When the assassins arrive to the feast, Macbeth asks if they succeeded and is enraged when he finds out that Banquo’s son escaped. Then he sees Banquo’s ghost in his armour standing among other guests next to the table. Macbeth is afraid and starts to talk to the ghost which is unseen by everyone else. Lady Macbeth tries to calm everyone by claiming that her husband is unwell, but Macbeth continues to rave, which prompts Macduff and his wife to leave the feast despite the King ordering them to stay. Lady Macbeth dismisses all the guests and takes Macbeth back to their chamber.

Macbeth travels in the night to talk to the three witches. Once he finds them, they show him a vision of slain soldiers who tell him to beware Macduff, and he shall be King until Great Birnam Wood comes to Dunsinane Hill, where the royal castle is built. Finally the ghost of the slain boy soldier who gave him the dagger tells him that he won’t be slain by any man born from a woman. The King is found wandering the hills by Lennox who passes the news that Macduff fled to England. Fearing this with a fit of rage, Macbeth orders his family and servants to be killed. Lady Macduff and her children are captured and burned at the stake, while a distraught Lady Macbeth watches the execution. After the burning she takes out the daggers that were used to kill Duncan and repeatedly washes them.

Meanwhile, Macduff meets up with Malcolm, who is gathering troops in England for the march in Scotland. The Prince informs him about the murder of his family and servants. Stricken with grief and anger, Macduff swears revenge and both he and Malcolm (who supports Macduff) join forces to challenge Macbeth.

Haunted by guilt, Lady Macbeth returns to her village, now abandoned, and laments in the church on the terrible deeds that were done and how her hands are covered in bloodstains. She then sees the ghost of her dead child which she urges to go to bed. She then walks among the hills and sees the three witches.

In the castle, rumours spread that Macbeth went mad and his subjects fear his anger and tyrannical behaviour. Macbeth is told his wife is dead. He then lifts her body and carries her around the chamber in despair. His soldier then brings him news that Malcolm is leading an army against him and Macbeth orders his armour to be brought to him.

Macduff sets the Birnam Wood on fire, with the smoke and ashes blowing towards the castle, making the prophecy come true. Macbeth leaves the castle to face the attacking army and engages in a duel with Macduff. Macbeth is confident that he will win as „no man born of woman” can kill him. Macduff then tells him that he was ripped from his mother’s womb and, using Macbeth’s distraction, he stabs him. Macbeth refuses to admit defeat and bow to Malcolm and so he engages Macduff once again. After an intense battle, Macduff kills Macbeth in the battlefield as Malcolm is hailed King of Scotland. The three witches that were observing the battle leave after witnessing Macbeth’s death.

In the last scene, Malcolm is seen leaving the throne room while Banquo’s son takes Macbeth’s sword and charges through the empty battlefield, disappearing into the smoke. 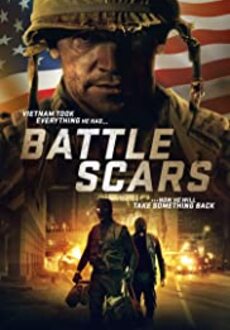