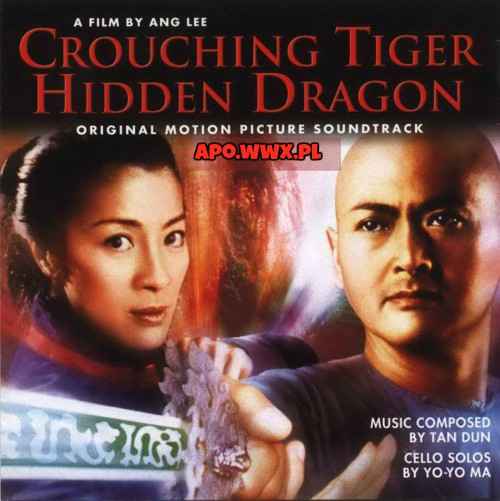 One evening, a masked thief sneaks into Sir Te’s estate and steals the sword. Mu Bai and Shu Lien trace the theft to Governor Yu’s compound and learn that Jade Fox has been posing as Jen’s governess for many years. Mu Bai makes the acquaintance of Inspector Tsai (Wang Deming), a police investigator from the provinces, and his daughter May (Li Li), who have come to Peking in pursuit of Fox. Fox challenges the pair and Sir Te’s servant Master Bo (Gao Xi’an) to a showdown that night. Following a protracted battle, the group is on the verge of defeat when Mu Bai arrives and outmaneuvers Fox. Before Mu Bai can kill Fox, the masked thief reappears and partners with Fox to fight. Fox resumes the fight and kills Tsai before fleeing with the thief (who is revealed to be Fox’s protégé, Jen). After seeing Jen fight Mu Bai, Fox realizes Jen had been secretly studying the Wudang manual and has surpassed her in combative skills.

At night, a desert bandit named Lo (Chang Chen) breaks into Jen’s bedroom and asks her to leave with him. A flashback reveals that in the past, when Governor Yu and his family were traveling in the western deserts, Lo and his bandits had raided Jen’s caravan and Lo had stolen her comb. She chased after him, following him to his desert cave seemingly in a quest to get her comb back. However, the pair soon fell passionately in love. Lo eventually convinced Jen to return to her family, though not before telling her a legend of a man who jumped off a cliff to make his wishes come true. Because the man’s heart was pure, he did not die. Lo came to Peking to persuade Jen not to go through with her arranged marriage. However, Jen refuses to leave with him. Later, Lo interrupts Jen’s wedding procession, begging her to come away with him. Nearby, Shu Lien and Mu Bai convince Lo to wait for Jen at Mount Wudang, where he will be safe from Jen’s family, who are furious with him. Jen runs away from her husband on the wedding night before the marriage could be consummated. Disguised in male clothing, she is accosted at an inn by a large group of warriors; armed with the Green Destiny and her own superior combat skills, she emerges victorious.

Jen visits Shu Lien, who tells her that Lo is waiting for her at Mount Wudang. After an angry dispute, the two women engage in a duel. Although Shu Lien is the superior fighter, Jen, wielding the Green Destiny, destroys each weapon that Shu Lien wields, until Jen loses to a broken sword held at her neck. When Shu Lien shows mercy and lowers the sword, Jen injures Shu Lien’s arm. Mu Bai arrives and pursues Jen into a bamboo forest. Following a duel where Mu Bai regains possession of the Green Destiny, he decides to throw the sword over a waterfall. In pursuit, Jen dives into an adjoining river to retrieve the sword and is then rescued by Fox. Fox puts Jen into a drugged sleep and places her in a cavern; Mu Bai and Shu Lien discover her there. Fox suddenly reappears and attacks the others with poisoned darts. Mu Bai blocks the needles with his sword and avenges his master’s death by mortally wounding Fox, only to realize that one of the darts hit him in the neck. Fox dies, confessing that her goal had been to kill Jen because she was furious that Jen had hid the secrets of Wudang’s far superior fighting techniques from her.

As Jen exits to gather up an antidote for the poisoned dart, Mu Bai prepares to die. With his last breaths, he finally confesses his romantic affections for Shu Lien. He dies in her arms as Jen returns, too late to save him. TheGreen Destiny is returned to Sir Te. Jen later goes to Mount Wudang and spends one last night with Lo. The next morning, Lo finds Jen standing on a balcony overlooking the edge of the mountain. In an echo of the legend that they spoke about in the desert, she asks him to make a wish. He complies and wishes for them to be together again; back in the desert. Jen then suddenly leaps over the side of the mountain.