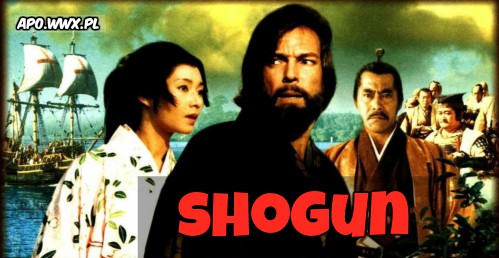 PLOT –  After his Dutch trading ship Erasmus and its surviving crew is blown ashore by a violent storm at Injiro on the east coast of Japan, Pilot-Major John Blackthorne, the ship’s English navigator, is taken prisoner by samurai warriors. When he is later temporarily released, he must juggle his self-identity as an Englishman associated with other Europeans in Japan, namely Portuguese traders and Jesuit priests, with the alien Japanese culture into which he has been thrust and now must adapt to in order to survive. Being an Englishman, Blackthorne is at both religious and political odds with his enemy, the Portuguese, and the Catholic Church’s Jesuit order. The Catholic foothold in Japan puts Blackthorne, aProtestant and therefore a heretic, at a political disadvantage. But this same situation also brings him to the attention of the influential Lord Toranaga, who mistrusts this foreign religion now spreading in Japan. He is competing with other samurai warlords of similar high-born rank, among them Catholic converts, for the very powerful position of Shōgun, the military governor of Japan.

Through an interpreter, Blackthorne later reveals certain surprising details about the Portuguese traders and their Jesuit overlords which forces Toranaga to trust him; they forge a tenuous alliance, much to the chagrin of the Jesuits. To help the Englishman learn their language and to assimilate to Japanese culture, Toranaga assigns a teacher and interpreter to him, the beautiful Lady Mariko, a Catholic convert, and one of Toranaga’s most trusted retainers. Blackthorne soon becomes infatuated with her, but Mariko is already married, and their budding romance is ultimately doomed by future circumstances.

Blackthorne saves Toranaga’s life by audaciously helping him escape from Osaka Castle and the clutches of his longtime enemy, Lord Ishido. To reward the Englishman for saving his life, and to forever bind him to the warlord, Toranaga makes Blackthorne hatamoto, a personal retainer, and gifts him with a European flintlock pistol. Later, Blackthorne again saves Toranaga’s life during an Earthquake by pulling him from a fissure that opened and swallowed the warlord, nearly killing him. Having proved his worth and loyalty to the warlord, during a night ceremony held before a host of his assembled vassals and samurai, Lord Toranaga makes Blackthorne a samurai; he awards him the two swords, 20 kimonos, 200 of his own samurai, and an income-producing fief, the fishing village Anjiro where Blackthorne was first blown ashore with his ship and crew. Blackthorne’s repaired ship Erasmus, under guard by Toranaga’s samurai and anchored near Kyoto, is lost to fire, which quickly spread when the ships' night lamps were knocked over by a storm tidal surge. During a later attack on Osaka Castle by the secretive Amida Tong (Ninja assassins), secretly paid for by Lord Ishido, Mariko is killed while saving Blackthorne’s life, who’s temporarily blinded by the black powder explosion that kills his lover.

As Shōgun concludes, Blackthorne is supervising the construction of a new ship, The Lady; it is being built with funds Mariko left to him in her will for this very purpose. Blackthorne is observed at a distance by Lord Toranaga; avoice over reveals the warlord’s inner thoughts: It was he who ordered the Erasmus destroyed by fire, not from a tidal surge, in order to keep Blackthorne safe from his Portuguese enemies who feared his actions with the ship; Blackthorne still has much to teach Toranaga. And, if need be, the warlord will destroy the ship Blackthorne is currently building. He also discloses Mariko’s secret but vital role in the grand deception of his enemies, and, as a result, how she was destined to die gloriously in Osaka Castle and live forever, helping to assure his coming final victory. The warlord knows that Blackthorne’s karma brought him to Japan and that the Englishman, now his trusted retainer and samurai, is destined never to leave. Toranaga also knows it is his karma to become Shōgun.

In the miniseries epilogue it is revealed that Toranaga and his army are triumphant at the Battle of Sekigahara; he captures and then disgraces his old rival, Lord Ishido, and takes 40,000 enemy heads, after which he then fulfills his destiny by becoming Shōgun.