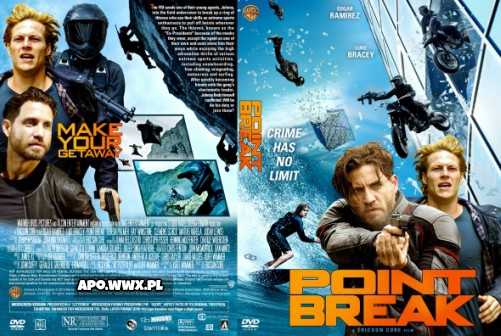 PLOT –  Extreme sport athlete Johnny Utah and his friend Jeff are traversing a steep ridgeline on motorbikes. The run ends with a jump onto a lone stone column, where Jeff overshoots the landing and falls to his death.

Seven years later, Utah is an FBI agent candidate. He attends a briefing on a skyscraper heist where the criminals steal diamonds, escaping by parachute. A similar heist happens over Mexico where the criminals unload millions of dollars in bills over Mexico, then disappear into a large cave. Utah’s research concludes that they were done by the same men, who are attempting to complete the Ozaki 8, a list of eight extreme ordeals to honor the forces of nature. They have already completed three, and Utah predicts they’ll attempt the fourth on a rare sea wave phenomenon in France. After presenting his analysis, Utah is sent undercover to France under a field agent named Pappas. They reach France and Utah gets help from others to surf the tall tube wave.

As he goes in, there’s already another surfer in the wave, leaving Utah with an unstable wave. Utah gets sucked into the wave and faints, but the other surfer bails and rescues Utah. He wakes aboard a yacht with the surfer, Bodhi, and his team Roach, Chowder, and Grommet. They leave him to enjoy the party and he gets acquainted with a girl, Samsara. The next day, Utah finds the men in an abandoned Paris train station after he overhears them talk about the location. Bodhi gives him an initiation fight and soon he is in the circle. They travel to the Alps for the next ordeal, wingsuit flying through the cliffs „The Life of Wind”. The four succeed in their attempt and spend some time together with Samsara. The next day, they climb the snow peaks for the sixth ordeal, snowboarding through a steep wall of snow. They reach their spot, but Utah decides to extend his line so the others follow him. Chowder slips and falls to his death, and Utah becomes depressed about it.

After a party, Samsara explains that she and Bodhi both knew Ono Ozaki when they were young, that her parents died in an avalanche accident and Ozaki gave her a home after. She explains further that Ozaki actually completed his third ordeal, as was widely believed. He did not die attempting the ordeal, but was actually killed by a whaling ship crashing into his boat while he was trying to save humpback whales. On his boat, a young boy, Bodhi, decided not to tell the truth of his story but to finish what Ozaki started.

Next they travel to a gold mine where Bodhi detonates explosives Grommet and Roach planted. After blowing his cover, Utah chases Bodhi, managing to trip his bike. Bodhi escapes as Utah can not stand up after the crash. The FBI freezes Bodhi’s sponsors' assets; Bodhi plans to rob a nearby Italian bank on a mountain top. Utah and the police intercept the group, resulting in a crossfire that kills Roach. As the group flees, Utah chases and shoots one of them, revealed to be Samsara.

Utah finds the location of the next ordeal: solo rock climbing with no safety beside a waterfall. He finds Bodhi and Grommet and chases them on the climb, but Grommet cramps and falters, falling to his death. Utah catches up to Bodhi, but he leaps down the waterfall, completing what would have been the last ordeal; Bodhi has to redo the fourth ordeal as he bailed out on the wave when he had to save Johnny. 17 months later, Utah finds him in the Pacific facing another giant wave. Utah lets Bodhi attempt to surf it, both knowing that he will not come back. The wave engulfs Bodhi and Utah continues his career in the FBI.