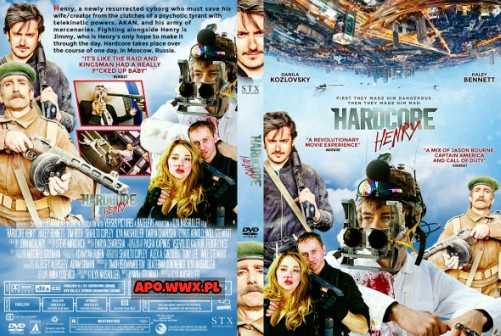 – Henry recalls being bullied as a child before waking up in a tank of water inside a laboratory on an airship missing his left arm and left leg. A scientist, Estelle (Haley Bennett), replaces his missing limbs with cybernetic ones and reminds Henry that she is his wife and that he has amnesia after waking up from a horrible accident. Just as Henry begins to get his bearings, a group of mercenaries led by the telekinetic Akan (Danila Kozlovsky) arrive and kill the other scientists. Henry and Estelle flee the ship in an escape pod, but they are ambushed on the ground by Akan’s mercenaries and Estelle is abducted.

Henry is rescued from the mercenaries by Jimmy (Sharlto Copley), who informs him that his robotic parts are running out of power and that he will die if he cannot recharge. Jimmy is almost immediately killed by the mercenaries, but Henry meets another version of Jimmy – disguised as a drunken, odorous hobo – on a bus. Bum Jimmy informs him that one of Akan’s associates named Slick Dimitry has a charging pump implanted in his heart, which Henry can use to recharge. Bum Jimmy is killed by a flamethrower before Henry flees and sneaks into Dimitry’s apartment. Henry chases Dimitry throughout the city before incapacitating him; Dimitry is killed by a sniper. Henry removes the pump and receives a call from Jimmy, who directs Henry to his current location – a brothel.

Henry heads to the brothel and meets two more versions of Jimmy – a debauched lothario addicted to cocaine, and an awkward, painfully shy and overapologetic geek in a vest. The two versions of Jimmy replace the pump, but the brothel is attacked by Akan’s forces. Henry manages to fight through the mercenaries, but encounters Akan, who taunts Henry by saying his wife is being hauled away in an armored convoy, and hurls him out of the brothel.

Outside, Henry encounters Jimmy once more – this time, a marijuana-using hippie with a chopper, who gives him a ride in his motorcycle sidecar and brings him to Akan’s convoy. Henry finds Estelle in the truck leading the convoy; before he can rescue her, Akan arrives and prepares to strike Estelle with a baseball bat. Henry steps in, „volunteering” to take her place, and is struck unconscious.

Jimmy revives Henry in the woods, before being killed by a tank shell. Henry kills the crew manning the tank, as well as most of the men in an attacking helicopter, before falling off the helicopter and landing in a tree. He follows another of Jimmy’s signals to an abandoned hotel, where he finds the original Jimmy upstairs. Jimmy reveals that Akan created Henry’s cyborg abilities, and that he worked on the first stages of Akan’s cyborg-soldier project, which turned out to be a failed batch of lobotomized super-soldiers unable to do anything but mindlessly swing at the air. Akan „rewarded” him with snapping his spine – he is now a quadriplegic confined to a wheelchair. He reveals the other Jimmys are dormant clones of himself his mind can inhabit, which he created to regain mobility and indulge in vices; he demonstrates this by performing a song and dance number with all of his clones. All the copies of Jimmy attack Henry after Jimmy realizes that Henry has unknowingly been broadcasting his video feed to Akan. Henry disables all his clones – the original Jimmy begs to be killed, fearing everything is lost, but is convinced to bring the fight to Akan. Henry and Jimmy – now a stereotypical WW2 officer – fight their way out of the complex, killing the mercenaries' leader by dropping the laboratory on him via plastic explosives.

Jimmy and Henry drive to Akan’s headquarters, a massive skyscraper. They fight their way into an elevator, but Jimmy is mortally wounded. Before dying, Jimmy thanks Henry for being the closest thing he ever had to a friend. Henry fights his way to Akan’s office, where he is greeted by a video of Akan revealing that an army of cyborg super-soldiers are being fed Henry’s memories and will all remember waking up like he did in the laboratory – with a wife, being attacked, and manipulated into doing anything to „get” her back – such as committing terrorist attacks for Akan, who plots to take over the world with this new army. The first soldier to wake up attacks Henry, but Henry kills him and replaces his battery with the soldier’s. The rest of the army awaken and chase Henry up to the roof of the building.

On the roof, Henry battles and kills the entire army. He then attacks Akan, who knocks Henry out again with his telekinetic abilities. When he wakes up, Akan reveals that Estelle was his wife all along, and she had been lying to Henry the entire time – she and Akan had been planning to lure Henry to Akan’s headquarters so he could be replicated and mass produced. Henry blacks out after a barrage of attacks, but is energized by a memory of his father (Tim Roth), who encouraged him to fight back against a gang of childhood bullies. Henry fights Akan and decapitates him with his cybernetic eyestalk. He jumps up onto a helicopter in which Estelle is trying to escape. An enraged Estelle asks Henry how „could he do this” – Henry simply responds by writing „EZ” in his own blood. She fires at Henry, but the bullet ricochets off his hand and wounds her; she stumbles out of the helicopter and is left hanging by her fingertips. Estelle pleads with Henry to save her, but Henry slams the door on her fingers, sending her falling to her death.

As the credits roll, a message from Jimmy is heard, asking Henry to do „one last thing”.