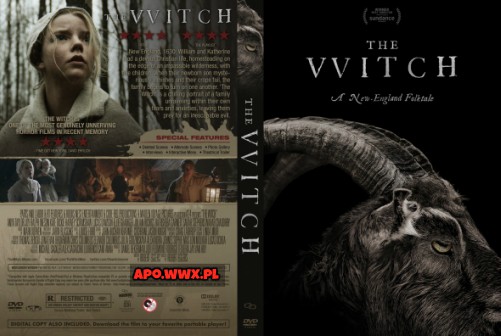 PLOT –  In the 17th century, a man named William is excommunicated from a Puritan Christian plantation in New England alongside his family — wife Katherine, daughter Thomasin, son Caleb, and fraternal twins Mercy and Jonas — due to the crime of “prideful conceit.” The family is exiled and builds a farm by a large forest. After several months, Katherine gives birth to her fifth child, Samuel. One day, while Thomasin is playing with Samuel, the baby vanishes. A witch in the woods is revealed to have stolen the baby, after which she kills him and uses his blood and fat to make a flying ointment, which she rubs over herself.

Katherine is devastated by Samuel’s disappearance and spends her days crying and praying to God. While hunting for food, Caleb confronts his father about the fate of hisunbaptized brother’s soul while William reveals that he traded Katherine’s silver cup for hunting supplies. Back on the farm, the twins play with the family’s black goat named Black Phillip who they claim speaks to them. That night, Katherine reveals that she blames Thomasin for Samuel’s disappearance.

The next morning, Caleb and Thomasin go hunting. The siblings encounter a hare that Caleb and William had seen the day before. Their dog gives chase and Caleb follows. The commotion causes Thomasin’s horse to throw her, knocking her unconscious. After getting lost, Caleb discovers their dog has been disemboweled and is then captured by the witch. Thomasin awakens and returns but Caleb is not found. Katherine blames her for Caleb and for the disappearance of her silver cup. To save Thomasin from her mother’s rage, William admits that he was the one who stole her silver. That night, Thomasin discovers that Caleb, naked and ill, has managed to return to the farm.

Katherine suggests Caleb’s mysterious ailment is the result of witchcraft. The family prays over him, and Caleb passionately proclaims his love for Christ before dying. The twins accuse Thomasin of witchcraft and she in turn accuses the twins, citing their ability to speak to Black Phillip. Enraged at their behavior, William boards Thomasin and the twins into their stable. That night the witch enters the stable and begins drinking the blood of the goats, terrifying Thomasin and the twins. Inside the house, Katherine has a vision that Caleb, Samuel, and her silver cup have returned to her, and, in her joy, begins breast-feeding the infant. In reality, Katherine exposes her breast to a raven, which pecks away at her body, leaving her clothes bloodstained.

The next day, William finds the stable destroyed, the goats drained of blood, the twins missing, and an unconscious Thomasin with bloodied hands lying nearby. William is then gored and killed by Black Phillip. An unhinged Katherine attacks Thomasin who, in self defense, stabs her mother to death. That night, Thomasin speaks to Black Phillip. The animal replies and is revealed to be Satan who takes human form. After signing her name in a book, Thomasin wanders naked into the forest where she finds a coven of nude witches holding aWitches’ Sabbath. The coven begins to levitate and a cackling Thomasin joins them, completing her transformation.