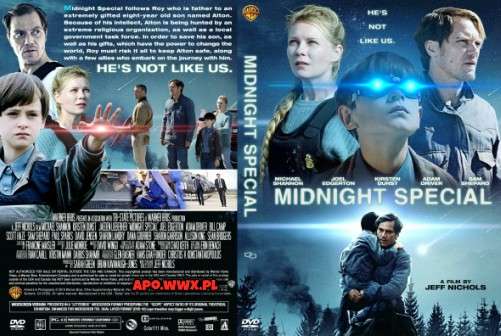 PLOT – Roy (Michael Shannon) has fled a religious cult in rural Texas with his eight-year-old son Alton (Jaeden Lieberher), who possesses otherworldly powers. An Amber Alert is issued for the child, leading Roy and his accomplice and long-lost childhood friend, state trooper Lucas (Joel Edgerton), to help bring the boy to an undisclosed location on a specific date, during which a celestial and possibly world-changing event may occur.

While driving through the back country late at night, the three are involved in a car accident. They seek shelter with Elden (David Jensen), a former member of the religious cult. Meanwhile, the FBI investigates the cult in their search for Alton; Paul Sevier (Adam Driver) leads interviews with members who proclaim Alton’s supernatural abilities, explaining that the boy had to live on a nocturnal sleeping schedule and was unable to face daylight. Apparently, the church’s sermons and their dates, based on prophecies made by Alton, are encoded with secret government information communicated by satellite.

Roy and Lucas leave Elden’s with Alton and stop at a gas station, where Alton uses his powers to pull a satellite from space, which ignites like meteors as it rains down on the area. They flee and meet Sarah (Kirsten Dunst), Alton’s mother, who has been excommunicated from the cult and has not seen her son in two years. While on the road, Alton senses the air patrol searching for him, and he urges them to stop. He runs into the woods, followed by Roy. They hide in a cave while Sarah and Lucas hide at a motel. Alton, in a weakened state—as a result of violent fits in which his eyes emit beams of light—tells Roy he needs to be in the sunlight. They watch the sunrise together. The earth begins to shake, and a dome of light surrounds them.

They arrive at the motel. Alton is inexplicably reinvigorated by the sunlight. He explains that he has discovered where his abilities originate: there is another plane existing above Earth’s, and he originates from there. Sarah tells Roy that she believes it may be their last day with their son, as the next day is the date of the cataclysmic event which Alton has prophesied. As the four attempt to leave the motel the next morning, they are ambushed by two henchmen from the cult (Bill Camp and Scott Haze), who kidnap Alton. Their car, in turn, is ambushed by the FBI, and Alton is flown to an FBI facility.

Alton is questioned by Sevier, and Alton exhibits supernatural powers to him. Alton convinces Sevier that he is of another world, and Sevier agrees to bring him to his parents. They meet in a remote location, and Lucas gives handcuffs to Sevier, who cuffs himself so as to make it appear that he was forced to bring Alton to them. Roy, Lucas, and Sarah plan to take Alton to the undisclosed location in Florida he has designated. Driving through a military road barricade, they arrive at a remote location in the woods, and Sarah and Alton flee from the car; Roy and Lucas drive away and are chased by military vehicles.

Alton and Sarah reach the edge of an everglade, where the ground begins to shake and an explosion of light encompasses most of the southeastern corner of the United States. Buildings and otherworldly architecture appear in the sky, exposing the aforementioned other dimension. Sarah watches as others like Alton emerge from the woods as beams of light and surround him. As Roy and Lucas continue to flee in the car, they also witness the otherworldly architecture. Suddenly, another explosion occurs, and Alton and the otherworldly plane disappear before Sarah’s eyes.

Roy and Lucas are taken into custody. Lucas is interviewed by the FBI. He tells them the exact story of what happened, but they are unsatisfied. Sevier then enters to interview him, the other FBI members unknowing of his helping them fulfill Alton’s mission. Sarah cuts and dyes her hair to conceal her identity. The film ends with Roy, incarcerated by the FBI, wearing an electroencephalography device. His eyes briefly glow a faint light.

« Sinister Squad
Barbershop The Next Cut »