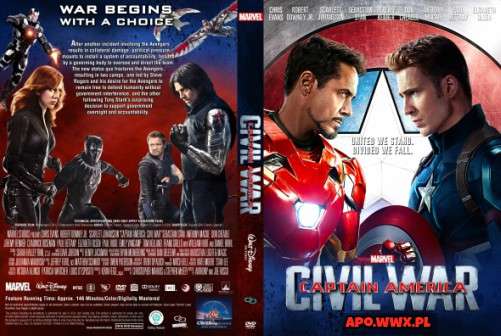 PLOT- In 1991, HYDRA operatives in Siberia revive Sgt. James „Bucky” Barnes from a cryogenic state and condition him to be completely obedient to anyone who recites certain trigger words. He is then dispatched to steal a briefcase containing super-soldier serum and leave no witnesses behind.

Approximately one year after the events of Avengers: Age of Ultron, Steve Rogers, Natasha Romanoff, Sam Wilson, and Wanda Maximoff stop Brock Rumlow from stealing a biological weapon from a lab in Lagos, Nigeria. During the fight, Wanda inadvertently causes a building to be bombed, killing a number of Wakandan relief aid workers and increasing the international community’s distrust on the Avengers’ work.

At the Avengers’ headquarters, Secretary of State Thaddeus Ross informs the Avengers that the United Nations is preparing to pass the Sokovia Accords, which will establish an international governing body to monitor and police the rapidly growing superhuman population.[citation needed] The team is divided over the act: Tony Stark supports oversight because he feels responsible for creating Ultron and for the destruction the android brought to Sokovia, while Rogers has lost faith in the government because HYDRA manipulated S.H.I.E.L.D. since its foundation.

In Vienna, where the Sokovia Accords are to be ratified, a bomb kills King T’Chaka of Wakanda. T’Chaka’s son, T’Challa, vows to kill the bomber. Security footage implicates Barnes in the bombimg. Without authorization, Rogers and Wilson track Barnes to his hideout in Bucharest and try to protect him from the police and T’Challa. Rogers, Wilson, Barnes, and T’Challa are captured.

While in captivity in Berlin, Barnes is released by Colonel Helmut Zemo, who uses HYDRA’s trigger words to send him on a rampage. Rogers stops Barnes and sneaks him away. When Barnes regains his senses, he protests his innocence and reveals that Zemo is heading to the facility where Barnes and other Winter Soldiers were created. Rogers recruits Wanda, Clint Barton, and Scott Lang to help him. Stark convinces Ross to let him bring his renegade comrades in, and assembles Romanoff, T’Challa, James Rhodes, and Vision. Feeling undermanned, Stark visits Peter Parker and recruits him as well.

Stark and his team intercept Rogers’ team at Leipzig/Halle Airport. Romanoff lets Rogers and Barnes escape, while the rest of their team is captured. Rhodes is paralyzed after he is inadvertently shot down by Vision. Stark finds evidence that Barnes was framed and secretly follows Rogers and Barnes to the Siberian HYDRA facility, unaware that he is being pursued by T’Challa. They discover that the other Winter Soldiers have been killed by Zemo, who is Sokovian and wants to punish the Avengers for his family’s death. Zemo then shows security footage that reveals that in 1991, Barnes killed Stark’s parents, Howard and Maria Stark while retrieving the serum. Disillusioned and enraged, and learning of Rogers’ knowledge of the truth, Stark turns on Barnes, forcing Rogers to fight him. In the fight, Barnes loses his robotic arm and Rogers disables Stark’s armor. Rogers departs with Barnes and leaves his shield behind. Zemo attempts to shoot himself, but is stopped by T’Challa, who takes him in alive.

In the aftermath, Stark gives Rhodes an exoskeleton to let him walk again. Rogers breaks his comrades out of prison and flees to Wakanda, where Barnes chooses to be frozen until a cure for his brainwashing can be found. In apost-credits scene, Parker is recovering from his injuries when his web-shooters project a spider-shaped symbol.