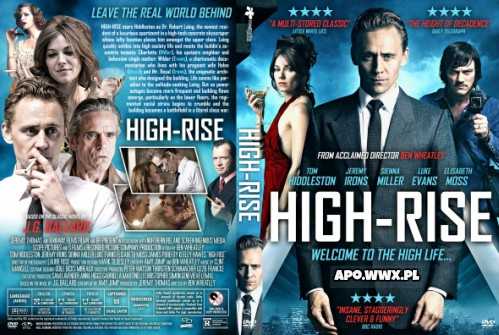 PLOT – The film opens with Dr. Robert Laing (Tom Hiddleston) living in a ravaged apartment tower. He captures a white Alsatian dog and spit roasts it over a makeshift fire while sitting on his apartment balcony. The film proceeds to recount the events of the previous three months.

After the death of his sister, Laing moves into a 25th floor apartment within a new high-rise tower, a luxurious apartment complex built by esteemed architect Anthony Royal (Jeremy Irons). The high-rise provides its tenants all of the conveniences and commodities that modern life has to offer: swimming pools, schools, a supermarket, a restaurant, and high-speed elevators. By the same token, there is little reason to leave the building, and its occupants (generally upper- and middle-class professionals, business people, and media figures) become increasingly isolated from the outside world, retreating instead into the tower’s secure environments and parties. Before long, underlying antagonisms begin to emerge between the tenants, as does a loose system of social stratification amongst the different sections of the building: the posh upper-class who live on the topmost floors, the professionals who live on the middle floors, and the rabble-rousing poorer tenants who live on the lower floors.

After an encounter with Royal’s aide, Charlotte Melville (Sienna Miller), Laing attends a party held in Charlotte’s apartment directly above his. The next morning, Laing is invited to meet Royal, who invites him to attend a party held by his wife, Ann (Keeley Hawes). Ann jokes about Laing’s attire, and he is thrown out of the party. On the way back a power failure causes Laing to become stuck in the elevator. Other technical faults begin to emerge throughout the high rise, and garbage chutes are clogged up. After a game of squash with Royal, the architect explains that these are merely teething problems.

Later, at work, Laing is given a brain scan of a trainee, Munrow (Augustus Prew), who fainted during an autopsy on a schizophrenic’s head. Munrow is also a resident of the high-rise, and laughed at Ann’s joke. Wanting revenge, Laing lies to Munrow, telling him that they „found something” in his brain.

Laing attends a children’s birthday party on the second floor, with Richard Wilder (Luke Evans) and his heavily pregnant wife Helen (Elisabeth Moss), two people he met at Charlotte’s party. After Helen mentions that the children were turned away from the pool for being too noisy, Wilder brings the children to the pool, interrupting a party held by actress Jane Sheridan (Sienna Guillory). While swimming during another power outage, Wilder kills Jane’s pet dog. Later, a drunken Munrow commits suicide by dropping off the high rise to his death. The next morning, Wilder angrily visits Laing, ranting about how „not one police car turned up” after Munrow’s death.

Life in the high-rise begins to degenerate quickly, due to continued power failures, petty annoyances among the neighbours and increasing tensions among the classes. Parties are held in the corridors and as infrastructure breaks down litter accumulates around the building and the supermarket is near empty. Laing starts to become less connected with his job in London, while becoming more violent when returning to the high rise. Laing also starts to develop remorse on lying to Munrow.

In time the majority of the residents stop going to work altogether, spending all of their time in the high-rise. They eventually divide into violent 'tribes'. One resident, Pangbourne (James Purefoy), suggests that they should beat up Wilder and collect supplies from the supermarket, in order to have a better party than the lower-floored people. Wilder is severely beaten, while his cine-camera records the fight, and is dumped outside of the building.

Laing is visited by Helen, and they form a romantic relationship. After Helen leaves, she is taken by Pangbourne to the top, where she becomes a replacement housemaid. Laing later receives a letter from Pangbourne, asking him to perform a lobotomy on Richard Wilder. Cosgrove (Peter Ferdinando), the only resident who leaves for work, is captured and killed while returning to the high-rise.

Wilder wakes up and decides to find Royal and kill him. Ironically he encounters Royal in the lobby who is explaining to a policeman that everything is fine in the building. Wilder makes his way up the high rise, eventually finding out that Charlotte is Royal’s aide, and acquiring a gun from an apartment he raids. Entering Charlotte’s apartment, he tortures her to find a way up to Royal’s penthouse. Wilder is eventually met by Laing, who performs a psychiatric examination. Laing is captured by Pangbourne, and almost thrown off the building when he refuses to lobotomise Richard Wilder, but is saved by Royal.

Laing and Royal eat dinner (where it is implied that the meat was either human or horse), and talk about the failure and ultimate success of the high rise; that it is a „crucible for change” and could lead to new developments. The women at the top, including Helen, begin working towards a more suitable management of the high rise. Helen also gives birth to her overdue child. Wilder manages to make his way to the penthouse, and shoots Royal after a scuffle. He is summarily killed by the women of the top.

The film ends as it began, with Laing eating the Alsatian. The women of the top have managed to form a new sort of society, Laing tends to people who are injured, then lies down with Charlotte in his arms, ready to greet the people of the new high-rise neighbouring them to the failure that entailed within theirs. The film ends with Toby, Charlotte’s son (earlier revealed to be Royal and Charlotte’s illegitimate child), listening to a speech of Margaret Thatcher.