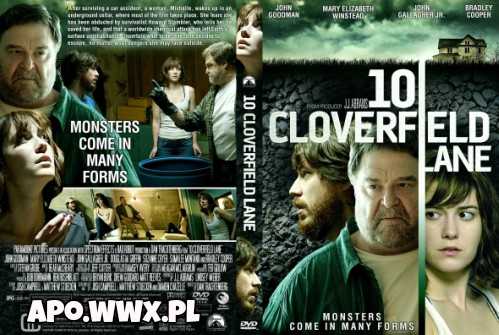 PLOT – Following an argument with her fiancé Ben, Michelle leaves New Orleans and drives through rural Louisiana. Late at night, she turns on the radio only to hear that there were continuous blackouts in major cities. Distracted by a call from Ben, Michelle gets into an accident and is rendered unconscious. She wakes up in a concrete room chained to a wall, and is approached by a man named Howard, who explains that an unknown attack has taken place and that he brought her to his bunker after finding her on the side of the road. Michelle meets Emmett, another survivor who witnessed the attack and fled to Howard’s bunker. During dinner, an unconvinced Michelle steals Howard’s keys and tries to escape, but discovers Leslie, a woman suffering from severe skin lesions, begging to get into the bunker. When Leslie dies, Michelle realizes Howard was right and stays.

As time passes, the trio begins adapting to living underground, and Michelle learns of Howard’s daughter Megan. When the air filtration unit breaks down, Howard asks Michelle to climb through the air ducts to reset the system. She discovers a window with the word 'HELP' scratched on the inside and a bloody earring that she recognizes from a picture of Megan. She shows the picture to Emmett, who recognizes her as a missing girl from his high school, Brittany. They then discover a polaroid of Brittany wearing the same clothes loaned to Michelle. Realizing that Howard is dangerous, they begin to plan an escape and fashion a biohazard suit, but Howard discovers that they are planning something. In defense of Michelle, Emmett accepts the blame and claims he was creating a weapon. After accepting an apology from Emmett, Howard summarily executes him with a revolver.

Michelle works to complete the biohazard suit but is again discovered by Howard. She dumps a vat of perchloric acid on him, severely burning him and inadvertently starting an electrical fire. She climbs back through the air ducts, puts on the suit, and escapes outside, where she realizes the air is not toxic. Moments later, a techno-organic extraterrestrial craft appears in the distance. The underground bunker then explodes from the fire, killing Howard in the process and attracting the craft’s attention. Michelle flees to Howard’s farmhouse, while being pursued by an unknown extraterrestrial creature, where she finds Leslie’s dead body. The craft releases toxic gas, forcing her to take shelter in Howard’s truck, which is then picked up by the craft as it attempts to consume her. However, Michelle assembles a Molotov cocktail and throws it into the craft. The resulting explosion destroys the ship.

Afterwards, Michelle drives away in Leslie’s car. While doing so, she hits the mailbox, causing it to fall off onto the road and revealing the address: 10 Cloverfield Lane. While scanning through the car’s radio, she hears a distress call claiming human victories against alien invasions on the Southern seaboard and instructing survivors to evacuate north of Baton Rouge while asking for anyone with medical or combat experience to proceed to Houston. Stopping the car to listen to the entire message, she notices a traffic sign, with one direction pointing to Baton Rouge and another pointing to Houston. After the message ends, she chooses to travel to Houston. Three even larger alien ships are seen floating aloft as she drives toward city lights in the distance.