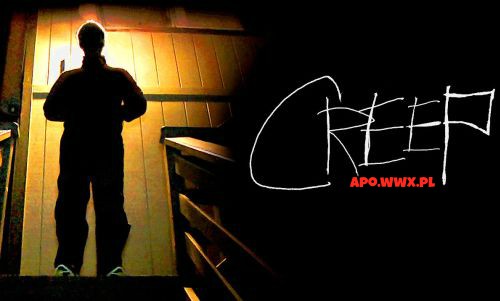 PLOT – Aaron (Patrick Brice) is an optimistic videographer who decides to come work for Josef (Mark Duplass) after answering his ad on Craigslist. All Aaron has to do is record Josef throughout the day and remain discreet about the entire setup. Josef tells Aaron that he will be recording a series of videos for his unborn son, as he is dying from a terminal illness and will never be able to see him grow up. Aaron first records Josef in a bath tub pretending to give his son a bath, and is then asked to come hiking with Josef. While getting a jacket, Aaron is startled by a wolf mask in the closet; Josef tells him that his father used to wear the mask and pretend to be a friendly wolf named Peachfuzz. Aaron accompanies him with the video camera. Throughout their time together, Josef repeatedly scares Aaron, excusing his behaviour by claiming he has a „weird sense of humor”.

At a restaurant after their hiking trip, Josef admits to Aaron that he had taken photos of him before they met, as he wanted to get to know Aaron before meeting him; he apologizes profusely. He also says that Aaron has an „animal in [him]”, as he looks ready to kill Josef when Josef scares him. As Aaron gets ready to leave that night, Josef asks him to stay for a drink of whiskey. He asks Aaron to turn off the camera; Aaron shuts off the video but leaves the sound on. Josef tells him he lied about Peachfuzz, and he wore the wolf mask in order to rape his wife and confirm his suspicions about her animal pornography habit. A now-unsettled Aaron drugs Josef’s whiskey, lays him to sleep and takes his phone, which suddenly starts ringing. Aaron hides and answers it; it is Josef’s „wife”, who tells Aaron that she is really just his sister, and that he needs to get out of the house as soon as he can. Returning to where he left Josef, Aaron finds him gone; he searches for Josef, who scares him once again and tells him that he doesn’t want to die before running off. Aaron attempts to leave through the front door, but Josef blocks it with the Peachfuzz mask on. Aaron charges at him, and the camera shuts off.

When the video resumes, Aaron reveals that he escaped the house and made it home, but he soon received a DVD in the mail from Josef of him burying some bags in the yard; Aaron thinks it is meant as a threat. He has also been having terrible nightmares about Josef. Josef sends him a large box with a knife and a stuffed wolf in it, as well as another DVD with a video of Josef apologizing for the last video and saying that he really cares about Aaron. Aaron rips open the stuffed wolf, finding a locket with Josef’s and Aaron’s pictures in it, which he throws away. After getting no help from the police, Aaron hears a trash can fall one night, and as he investigates his home, Josef appears at the front door. Days later, Josef takes the camera and films Aaron while he sleeps. Aaron finds another DVD labeled „My Last Video” in his house. Josef, in the video, apologizes again, reveals that he found the locket in Aaron’s trash, and asks Aaron to come to the public lake by his house to „give them closure”. Aaron films himself from his car as he goes to the lake. As he sits on a bench, Josef approaches him from behind, puts on the Peachfuzz mask, and axes Aaron in the skull, killing him.

As a goodbye bid of sorts to Aaron, Josef films himself watching the murder tape, which he has already done several times before. He expresses admiration and even puzzlement at Aaron’s naivety and kindness, and claims he loves him and considers him to be his favorite „of them all” as a result. He shuts off the camera after jump-scaring himself by bursting into the camera’s angle of vision seconds after murdering Aaron. Josef puts a DVD labeled „Aaron <3” in a cabinet full of videos and DVDs with different people’s names on them, as he identifies himself as Bill over the phone while speaking to yet another person about hiring them for the same job for which he had hired Aaron.