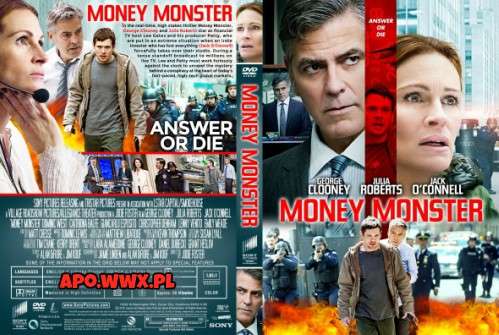 – Cable financial guru Lee Gates (George Clooney) is in the midst of airing the latest edition of his show, „Money Monster.” Less than 24 hours earlier, IBIS Clear Capital’s stock inexplicably cratered due to a glitch in a trading algorithm, costing investors $800 million. Lee planned to have IBIS CEO Walt Camby (Dominic West) appear for a softball interview about the crash, but Camby unexpectedly left for a business trip in Geneva.

Midway through the show, a deliveryman ambles onto the set, pulls a gun and takes Gates hostage, forcing him to put on a vest laden with explosives.[4] The „deliveryman” is laborer Kyle Budwell (Jack O’Connell), who invested $60,000—his entire life savings, inherited from his deceased mother—in IBIS after Lee endorsed the company a month earlier on the show. Kyle was wiped out along with the other investors, and now wants answers. Unless he gets them, he will blow up Lee before killing himself. Once police are notified, they discover that the receiver to the bomb’s vest is located over Lee’s kidney. The only way to destroy the receiver—and with it, Kyle’s leverage—is to shoot Lee and hope he survives.

With the help of longtime director Patty Fenn (Julia Roberts), Lee tries to calm Kyle down and get him some answers. However, Camby is nowhere to be found, and Kyle is not satisfied when both Lee and IBIS chief communications officer Diane Lester (Caitriona Balfe) offer to compensate him for his financial loss. He also is not satisfied by Diane’s insistence that the algorithm is to blame. Diane is not satisfied by her own explanation either, and decides to contact the programmer who created the algorithm for answers, reaching a man in Seoul. The programmer insists that an algorithm could not take such a large, lopsided position unless a human meddled with it.

In the meantime, the police find Kyle’s pregnant girlfriend and allow her to talk to Kyle through a video feed. When she learns that he lost everything, she viciously berates him before the police cut the feed. Lee, seemingly taking pity on Kyle, agrees to help Kyle discover what went wrong.

Once Camby arrives back in New York, Diane flips through his passport, revealing that he didn’t go to Geneva at all, but to Johannesburg. With this clue, along with messages from Camby’s phone, Patty and the „Money Monster” team contact a group of Icelandic hackers to try and discover the truth. After a police sniper takes a shot at Lee and misses, he and Kyle resolve to corner Camby at Federal Hall, where Camby is headed according to Diane. They head out with one of the network’s cameramen, the police, and a mob of fans and jeerers alike. They barely manage to corner Camby, and after ensuring that he will not run away, they finally confront him with the full story, with video evidence obtained by thehackers.

It turns out that Camby bribed a South African miners' union, planning to have IBIS make an $800 million investment in the mine while the union was on strike. If Camby’s plan had succeeded, IBIS would have generated a multi-billion dollar profit when work resumed at the mine and the stock of the mine’s owner rose again. However, the gambit backfired when the union stayed on the picket line, causing IBIS' stock to sink under the weight of its position in the flailing mining company. Confronted with the evidence, Camby admits his swindle. Satisfied, Kyle kills himself by allowing the police to shoot him after throwing the detonator away. In the aftermath, the SEC announces that IBIS will be put under scrutiny and Camby on trial for violations of the Foreign Investments Act.