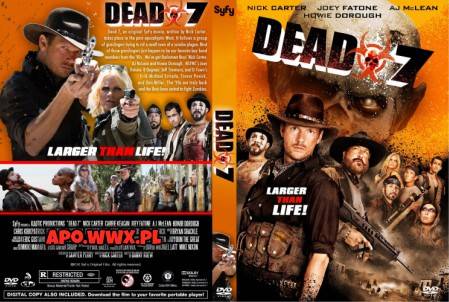 PLOT – After the zombie apocalypse occurs, mankind reverts to a simpler way of life reminiscent of the Old West. However, a woman named Apocalypta has decided to try and train zombies to use as her army to take over what is left of the world. After creating her army, which she calls Copperheads, she has her subordinates, Johnny Vermillion and Stamper, begin leading them to the town of Harper’s Junction. Some of the residents run or hide while others, such as Billy, begin to fight back. When Billy is almost killed by a Copperhead, he is saved by his girlfriend Daisy Jane. Daisy and Billy encounter Johnny and capture him but with the sheriff dead and the town overrun, they decide to take him with them as they head to Desert Springs. In Desert Springs, Mayor Shelby, who lost an eye to Apocalypta, and Sheriff Cooper question Johnny about why Apocalypta attacked Harper’s Junction, and when Johnny mocks them, Shelby tells Cooper to hang Johnny at sunrise. Meanwhile, Stamper tells Apocalypta about Johnny being captured and she orders him to go rescue Johnny. He does and they plan their escape but before he leaves, Johnny pays a visit to Georgie, a young boy that Cooper is raising.

Hearing about Johnny’s escape, Shelby orders Cooper to assemble a group to head up and kill Johnny, Apocalypta, and all of the Copperheads they see. At a nearby saloon, a man named Whiskey Joe is playing cards and when the men accuse him of cheating and try to kill him, he knocks them all out and leaves, where Cooper approaches him to join his team. Whiskey Joe goes to recruit his friend Vaquero, who recommends they bring a ninja named Komodo with them. Meanwhile, Daisy goes to the post office to hire a ranger to find Billy’s brother Jack, hoping to get his help with Apocalypta but Billy is not happy about it. Whisky Joe, Vaquero, and Komodo meet up with Daisy, Billy, and Cooper, who explains the plan but the only person that can guide them through the valley near Apocalypta’s base is Jack and there has been no word from him. Cooper leaves to go check on Georgie and Komodo mentions a warrior priestess named Sirene that might help them, but says they won’t be able to find her, she will find them. Cooper reaches his house and finds the door open and when he hears a sound, he turns to find Georgie has been turned into a Copperhead. Billy and Daisy are arguing about Jack when they see a transformed Cooper approaching, leading an army of townspeople that have been transformed into Copperheads. Billy and Daisy warn the others as the bar they are at comes under attack and the group is forced to defend themselves. During the fight, Daisy is almost bitten by a Copperhead but is saved by Jack. After the fight, the mayor says he will give the group anything they want if they finish the mission and they all head off.

They arrive at the mines at the base of the mountain and Billy wants to go around them but Jack says they need to search the place as a friend had a stash of ammo hidden there and they need to rearm themselves. The group split up to search the mine but soon come under attack by a horde of Copperheads pouring out of the mine. Jack is almost killed by a Copperhead but is saved by Sirene, who joins up with Jack, Billy, and Daisy as they leave, with Jack saying they will tell the others where to meet up but they are unaware that they are being watched by Stamper. At the mountain base, Johnny tells Apocalypta that Stamper mapped out a way through the mines and they can attack Desert Springs while the heroes make their way up the mountain. Joe, Vaquero, and Komodo try contacting the others but are unable to reach anyone and argue about what to do at first but after some Copperheads attack them, Joe decides to continue heading up the mountain. Jack and the others come across a truck containing some dead bodies and when Stamper shows up to attack them, he is killed by Sirene. Sirene leads them up the mountain and when they stop for the night, she tells them about where the Copperhead name came from, and how her grandmother taught her how to track and hunt.

Komodo, Joe, and Vaquero reach a brothel that Trixie, a girl that Komodo likes, was heading for and decide to rest there. Jack and the others reach a corral that Apocalypta has her army of Copperheads held in and Sirene leads them up the mountain past it, saying to be careful of traps and Copperheads. Billy and Daisy argue over Billy’s not trusting Sirene but they are unaware that Johnny is watching them and he captures Billy when he falls behind the others. Back at the brothel, Joe manages to convince the owner Madame Jezebel to let them in and while Joe hooks up with one of the girls, Komodo finds Trixie and Jezebel leads Vaquero to the basement to get supplies but really tosses him to a Copperhead that is kept there. Vaquero is bit but manages to get away and warn the others but as Komodo, Trixie, and Joe escape, they turn to find Vaquero has changed and Joe is forced to shoot him.

Back on the mountain, the others notice that Billy is missing but choose to keep going. When they reach the top, they find the place seemingly deserted and split up to find a way in. Daisy finds Billy trapped in a cage but before she can free him, Johnny shows up and stabs her before dragging her towards some Copperheads, and they proceed to turn her as a devastated Billy watches helplessly. Johnny tells Apocalypta that he has the heroes trapped and she unleashes her army to attack Desert Springs. Jack and Sirene show up and free Billy, then Jack is forced to kill Daisy, they then make their way through the mines after Johnny only to find themselves trapped by a horde of Copperheads.

They manage to escape and trap the Copperheads in the mine and head back to try and save Desert Springs. In Desert Springs, Apocalypta and Johnny lead the Copperheads through the town, killing anyone that tries to stop them or escape. Jack, Billy, Sirene, Komodo, Trixie, and Joe try leading the Copperheads out of town but when Johnny attempts to shoot Sirene, Billy jumps in the way and is shot instead. He dies in Jack’s arms.

Komodo kills Johnny by decapitation, which enrages Apocalypta and she attacks Jack. Meanwhile, Joe, Komodo, and Trixie keep trying to lure the Copperheads out of town but Joe ends up getting bit and after he turns, he is blown up by a booby trap that he had prepared in case he was ever turned. Trixie is bit and when Komodo kisses her goodbye, she ends up biting him so Komodo kills her and then himself. Jack manages to kill Apocalypta and as he watches the Copperheads feed on her body, he is bit by a small child. Sirene kills the child then hands Jack his gun so he can kill himself. With Apocalypta dead, humanity has a chance to come back from the apocalypse while Sirene is shown to have given Jack a sky burial so his spirit can be reborn.