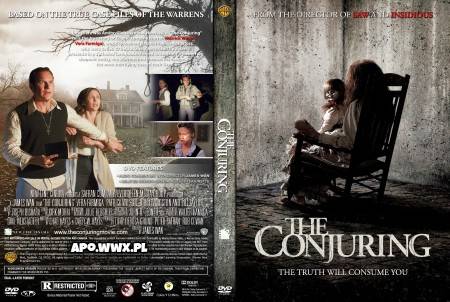 PLOT – In 1971, Roger and Carolyn Perron move into a dilapidated farmhouse in Harrisville, Rhode Island with their five daughters Andrea, Nancy, Christine, Cindy, and April. Their dog Sadie refuses to enter the house and one of the daughters finds a boarded-up entrance to a cellar.

Paranormal events occur within the first few nights: all of the clocks stop at exactly 3:07 AM and Sadie is found dead in the backyard. One night in bed, Christine feels a tugging on her leg, which is a spirit only she can see. She screams and says that the spirit wants the family dead. Another night, Carolyn hears clapping in the hallway. When she goes to investigate, following the noises, she gets trapped in the basement by the spirit. At the same moment, Andrea and Cindy are attacked by a spirit on top of the wardrobe.

Carolyn decides to contact noted demonologists Ed and Lorraine Warren, who agree to take on the case. The Warrens conduct an initial investigation and conclude that the house may require an exorcism, but they need authorization from the Catholic Church and further evidence before they can proceed.

Ed and Lorraine discover that the house once belonged to an accused witch, Bathsheba (a relative of Mary Towne Eastey), who sacrificed her week-old child to the devil and killed herself in 1863 after cursing all who would take her land. They find reports of numerous murders and suicides in houses that had since been built on the property.

To gather evidence, Ed and Lorraine place cameras and bells around the house. They see Cindy sleepwalking into Andrea’s room, and from the EVPs coming from the radio, they hear a spirit luring Cindy into the wardrobe, where she reveals a secret passage inside. Lorraine enters the passage and falls through the floorboards to the cellar, where she sees the spirit of a woman whom Bathsheba had long ago possessed and used to kill her child.

The Perron family decides to take refuge at a hotel while Ed and Lorraine take their evidence to the Church. The Warrens’ daughter Judy is attacked in their own home by Bathsheba, though Ed arrives in time to save her.

Carolyn, now possessed by Bathsheba, takes Christine and April back to the house. Ed and Lorraine find Carolyn in the cellar trying to stab Christine. After tying Carolyn to a chair, Ed decides to perform the exorcism himself. Though Carolyn escapes and attempts to kill April, Lorraine is able to distract Carolyn from killing her daughter by reminding her of a special memory she shared with her family, allowing Ed to complete the exorcism, saving Carolyn and April and lifting Bathsheba’s curse.

Returning home, Lorraine tells Ed that they had been left a message saying that they had gained approval from the Catholic Church to perform the exorcism. They also have another case to investigate on Long Island. When they leave, the music box that April had found opens and plays music.