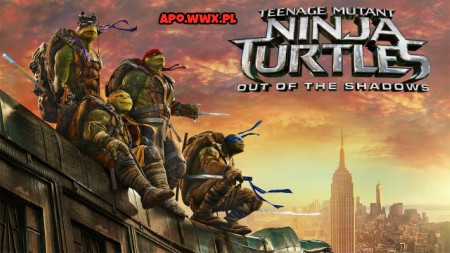 PLOT – One year after their battle with the Shredder, the Teenage Mutant Ninja Turtles, Leonardo, Donatello, Raphael, and Michelangelo, still live beneath the sewers, having allowed Vern Fenwick to take the credit for Shredder’s defeat. April O’Neil discovers that a scientist named Baxter Stockman is working for Shredder and that he plans to help Shredder escape from prison. April informs the turtles about this. As Shredder is transferred between prisons with two criminals alongside him, Bebop and Rocksteady, by corrections officer Casey Jones, the Foot Clan attack the convoy transporting him. Despite the turtles interference, Shredder escapes when Stockman uses a teleportation device. But Shredder is hijacked mid-teleport and winds up in another dimension. There, he meets the alien warlord Krang, who tells him about his plans to invade Earth and gives him a mutagenic compound in exchange for his promise to find three components of a machine that Krang sent to Earth long ago, which will open a portal to his dimension when united, and he knows that Shredder and Stockman have the first piece. After Casey’s failure to transport the prisoners, he decides to go out on his own.

Shredder returns to New York City and recruits Bebop and Rocksteady, who also escaped, and has Stockman use Krang’s mutagen to transform them into powerful animal mutants – a warthog and rhinoceros. April witnesses their transformation and is able to steal the vial of mutagen. Pursued by the Foot, she is rescued by Casey, who uses hockey gear. In the enusing battle, the vial of mutagen is taken into police custody. April then introduces Casey to the turtles. In the lair, Donatello deduces that the mutagen could be used to turn the turtles into humans, enabling them to live normal lives above ground, but Leonardo refuses and insists on keeping it a secret from the others. However, Michelangelo overhears their conversation and tells Raphael, which enrages Raphael and leading to a fierce argument between the brothers. Leonardo benches Raphael and takes Michelangelo off the mission. In the National Museum in New York, Shredder, Bebop, and Rocksteady are able to find the second piece and steal it, before Leonardo and Donatello arrive. Still furious, Raphael recruits Michelangelo, April, Casey, and Vern to break into the NYPD police headquarters and retrieve the mutagen. Vern distracts the police, while April and Casey retrieve the mutagen, but the Foot arrive ahead of them. In the ensuing battle, the turtles existence is revealed to the police, who react with fear and hatred. April and Casey intervene and help the brothers escape, but April and Casey are arrested. The police also see on TCRI’s cameras that April stole the mutagen.

With Shredder’s forces having already recovered two pieces of the device, the turtles track Bebop and Rocksteady as they recover the final piece in the rainforests of Manaus, Brazil. The turtles confront Bebop and Rocksteady in their jet and in the ensuing battle, the jet is destroyed. But Bebop and Rocksteady manage to escape with the final component. The turtles return to New York as Shredder and Stockman complete the portal device and open the gateway to Krang’s dimension, through which his modular war machine, the Technodrome, begins to emerge. Shredder betrays Stockman and has his men take him away to their headquarters in Tokyo, but upon entering the Technodrome, Krang immediately betrays Shredder, freezing him and locking him away with his collection of other defeated foes. April calls Vern to find out about the camera that incriminated in TCRI.

Seeing no way to combat the Technodrome, the turtles debate over taking the mutagen in order to become humans and fight openly. Though Leonardo agrees to do it, Raphael shatters the vial, realizing they must accept who they are. Vern recovers security footage that proves Stockman’s and Shredder’s crimes and secures April and Casey’s release, allowing them to set up a meeting between the turtles and police chief Rebecca Vincent, where they convince her that they are not enemies and that they were the ones who took down Shredder in the first place. With the help of the police, the turtles are able to confront Krang aboard the still-assembling Technodrome. Meanwhile, Casey keeps Bebop and Rocksteady busy and defeats them while April and Vern defeat Shredder’s lieutenant Karai and take control of the portal device. The turtles are able to hurl the Technodrome back through the portal, taking Krang and the rest of the Technodrome with it. April, Casey, and Vern then shut the portal down. As he disappears, Krang swears he will return for revenge.

In the aftermath, Bebop and Rocksteady are taken back into custody, while Stockman remains at large. At night, the Turtles are honored by Vincent and the NYPD, along with April, Casey, and Vern,and gives the turtles golden keys to the city, and she said to give an opportunity to the people and accept them, but the turtles elect to keep their existence a secret from the public, but they will always have help when they want. On top of the Statue of Liberty, the Teenage Mutant Ninja Turtles: „Out of The Shadows” celebrate the vanished Krang.