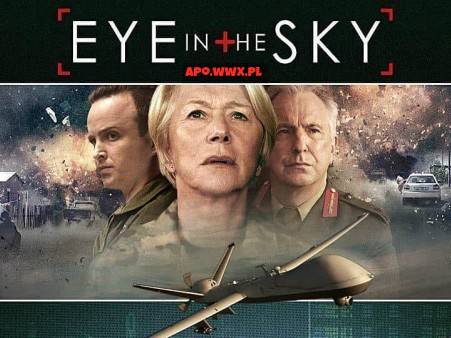 PLOT – Colonel Katherine Powell (Helen Mirren) wakes up early one morning and hears that a colleague has been murdered by the Al-Shabaab terrorist group. From Northwood Headquarters she then begins command of a mission to capture high-level Al-Shabaab extremists meeting in a safehouse in Nairobi, Kenya. Although no actual drone strikes have taken place in Kenya, the radicalized character 'Susan Helen Danford' is based on a real British woman, Samantha Lewthwaite.

A large multinational team works together on this capture mission, bound together by video images. Aerial surveillance is provided by a Reaper drone controlled from Creech Air Force Base in Nevada by USAF pilot Steve Watts (Aaron Paul). Undercover Kenyan field agents, including Jama Farah (Barkhad Abdi), use a short-range ornithopter and insectothopter for ground intel. Kenyan ground troops are positioned nearby to execute the arrest. Facial recognition to identify human targets is executed in Pearl Harbor, Hawaii.

Farah discovers that the terrorists have explosives and are preparing two suicide bombers for what is presumed to be an attack on a civilian target.

Powell decides that the imminent bombing changes the mission objective from „capture” to „kill”. She informs drone pilot Watts to prepare a precision Hellfire missile attack on the building and solicits the opinion of her legal counsel about doing so. To her frustration, her counsel advises her to seek approval from her superiors. Lieutenant General Frank Benson (Alan Rickman) is supervising the mission from London with members of the British government as witnesses and asks for permission. Citing conflicting legal and political views and contrasting the tactical value of the assassination with the negative publicity of killing civilians and the status of some of the targets as American or British nationals, they fail to reach a decision and refer the question up to the foreign secretary (Iain Glen).

Somewhat impaired by a bout of food poisoning on a trade mission to Singapore, he does not offer a definite answer and first tries to defer to the US Secretary of State (contacted on a cultural exchange in Beijing, he immediately authorises the strike) and then insists only for due diligence to be performed to minimize collateral damage.

Meanwhile, the situation at the house has become more difficult to assess. Alia Mo’Allim (Aisha Takow), a preteen girl who lives in the adjacent home, is visibly in grave danger if the building and the explosives inside are struck by a missile. Watts and his USAF colleague, Carrie Gershon (Phoebe Fox), can see Alia selling bread just outside the targeted building, and they seek to delay firing until she moves. Farah buys all of her bread so she will leave but, in the process, his cover is blown and he is forced to flee. The level of urgency is raised when, just as the suicide bombers finish their preparations, the surveillance video being captured by Farah’s stationary insectothopter, hidden above in the rafters, cuts off due to a drained battery.

Seeking a way to get the authorisation she needs to execute the strike, Powell orders her risk-assessment officer to find strike parameters to let him quote a lower risk of civilian deaths. He re-evaluates a strike point and places the probability of Alia’s death at 45–65%. She makes him report only the lower figure up the chain of command.

The strike is subsequently authorised, and Watts reluctantly fires a missile. The building is leveled, with casualties in and around it. Alia, who was reselling the bread Farah dropped upon fleeing, is injured and unconscious. However, one of the terrorist leaders has also survived.

Watts has to fire a second missile, which strikes the site just as Alia’s parents reach her. Both suffer minor injuries and rush Alia to a hospital, where the medical personnel are unable to revive her.