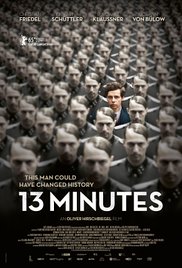 PLOT – In November 1939, after planting a bomb inside a column of a Munich bierkeller, Georg Elser (Christian Friedel) attempts to cross into neutral Switzerland but is caught at the border. His home-made bomb detonates but misses killing Adolf Hitler, the German leader, by just 13 minutes.

The German security services find incriminating evidence on Elser and link him to the assassination attempt. They believe Elser must have been working with a group of conspirators and torture Elser to find this information. They also round up members of his family from his home village, including Else Härlen (Katharina Schüttler), a married woman Elser has been seeing.

When Else Härlen is brought before Elser, he fears for her life and tells the police chief Arthur Nebe (Burghart Klaußner) and Gestapo head Heinrich Müller (Johann von Bülow) that he acted alone, procuring detonators from a steel factory and stealing dynamite from a nearby quarry. He outlines the two clockwork mechanisms he built to time the explosion and hopefully kill Hitler as he made a speech. Still believing Elser could not have attempted the assassination alone he once more tortured using drugs (Pervitin) but with the same result as before – he confirms acted alone.

Through flashbacks we learn how Elser came to despise the Nazis and how he saw that Hitler needed to be removed to save Germany. We learn that following his arrest, Elser was kept in concentration camps for five years and was shot a few days before American forces liberated Dachau concentration camp (a few weeks before the war ended).

Elser is now regarded a German resistance hero of the Second World War.