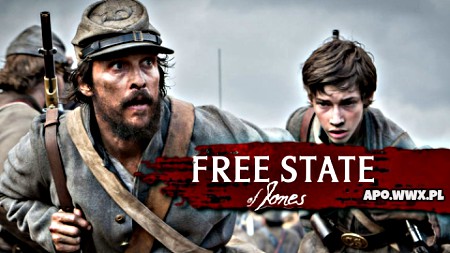 After surviving the 1862 Battle of Corinth, Newton Knight, a poor farmer from Jones County serving as a battlefield medic in the Confederate Army, deserts and returns home to his farm and his wife, Serena. While there, he befriends Rachel, a slave woman who has secretly learned to read.

Newton’s disenchantment with the Confederacy grows after learning that troops are seizing crops and livestock for taxes. After helping one family resist such a raid, he is bitten by a slave-catching dog. With the help of abolitionist Aunt Sally and several slaves, he escapes to a swamp where several runaway slaves led by Moses Washington tend to his wounds.

After the Siege of Vicksburg, Confederate desertions increase considerably, and many of them find their way to the swamp. Newton organizes the deserters and runaway slaves into a militia, and leads an armed rebellion against the Confederacy. They succeed in capturing a large slice of south-central Mississippi, organizing it as the „Free State of Jones”. Although they get little help from the Union, they manage to hold out until the end of the war.

Newton continues to fight against racial inequality after the war, helping to free Moses’ son from an „apprenticeship” to Rachel’s former master and registering freedmen to vote. He and Rachel have a son, Jason. Since they are unable to marry, Newton arranges to deed a parcel of land to her.

The story is interspersed with the saga of Newton’s great-great-great grandson, who is arrested under Mississippi’s miscegenation laws 85 years after the war. Since he is of one-eighth black descent, under Mississippi law of the day he is considered black, and therefore cannot legally marry his long-time sweetheart. He is sentenced to five years in prison, but his conviction is thrown out by the Mississippi Supreme Court rather than risk the law being declared unconstitutional.