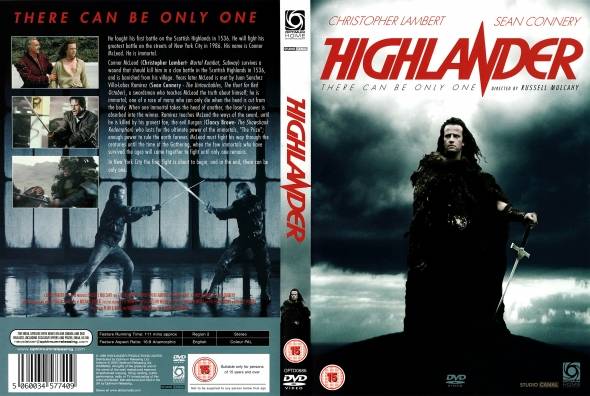 PLOT – In 1985, Connor MacLeod, also known as the Highlander, is in New York City. In an arena parking garage, Connor is confronted by fellow immortal Iman Fasil, and decapitates him, upon which an energy surge destroys several cars around him. He hides his sword just as police swarm the exit to the garage, and arrest Connor.

The story then goes back in time to the 16th century Scottish Highlands, in the village of Glenfinnan on the shores of Loch Shiel. Connor and his clan, the Clan MacLeod, prepare for battle. Back in 1985, the police release Connor, as they have failed to get any information from him. One of the detectives involved, Brenda Wyatt, is an expert in metallurgy and recognises Fasil’s sword as an extremely rare Toledo Salamanca broadsword. Later, Connor returns to the garage to retrieve his own sword but sees Brenda is looking at the crime scene. She finds metal shards embedded in a concrete column and saves them for analysis.

The scene returns to the Highlands, where the Kurgan assists the clan Fraser against the Clan MacLeod in exchange for the sole right to slaying Connor. In the resulting confrontation the Kurgan stabs Connor but is then driven off by the MacLeod clansmen. The wounded Connor is taken back to the village, and everyone assumes he will die. When he makes a remarkable overnight recovery, the village is convinced that it is the work of the devil. The villagers attempt to have Connor executed, but he is instead exiled by the clan leader out of mercy.

In 1985, Connor lives under the alias Russell Nash and is a wealthy antiquities dealer. Meanwhile, the Kurgan takes up residence at a seedy motel. Connor tails Brenda to a bar, but she leaves quickly. She then tails Connor, but the Kurgan attacks them both. The fight is interrupted by a police helicopter, and everybody flees. Brenda analyzes the metal fragments and discovers them to be from a Japanese katana, dated about 600 B.C. but made with advanced technology for the era. She makes a date with Connor in an attempt to entrap him. Connor recognises the ruse, tells her to stop digging, and leaves.

In the past, Connor lives an idyllic life with his wife Heather. One day, the mysterious Juan Sánchez Villa-Lobos Ramírez appears and begins training Connor in sword fighting. He explains that they both belong to a group of immortals, who constantly fight one another but can only be killed by complete decapitation. When one immortal decapitates another, the winner receives a transfer of power called „the quickening”. Eventually, all the immortals must do battle until there is only one left alive; the last survivor will receive „the Prize”. Ramirez tells Connor that the Kurgan, by that time the strongest of the immortals, must not win the Prize, or mankind will enter a dark age. One night, while Connor is away, the Kurgan attacks, decapitating Ramirez and raping Heather.

In Central Park, Connor meets a long-time friend, fellow immortal Sunda Kastagir. They talk about the impending gathering of immortals which precedes the final battle, and they joke about old times. Brenda has by now discovered that Connor has been alive for centuries, living under false identities, faking his death every few decades, signing his assets over to children who had died at birth, and assuming their identities. She confronts Connor, who demonstrates his immortality. After this revelation, Brenda and Connor become lovers, although Connor is reluctant, following a flashback in which Connor’s wife, Heather, dies of old age in his arms. Ramirez has earlier explained that immortals cannot have children and should not get romantically involved. Ramirez reveals his Japanese katana was made specifically for him by the father of his third wife.

The Kurgan finds Kastagir, killing him and wounding a man who witnessed his beheading. When the Kurgan finds out about Connor’s relationship with Brenda, he kidnaps her to draw Connor out. After a climactic battle at the Silvercup Studios in Queens, Connor defeats and beheads the Kurgan. He receives the Prize, which manifests itself as a massive quickening. Now mortal and capable of having children, Connor returns to Scotland with Brenda. Connor now has awareness of people’s thoughts around the world, and promises to use his gift to encourage cooperation and peace in mankind.