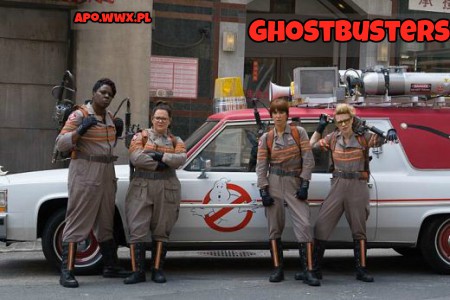 – Dr. Erin Gilbert and Dr. Abby Yates are co-authors of a book which posits the existence of paranormal phenomenon such as ghosts. When the book proves unpopular, Gilbert distances herself and eventually becomes a teacher at Columbia University, while Yates continues to study the paranormal at a technical college with eccentric engineer Dr. Jillian Holtzmann. Years later, Gilbert learns the book has been republished, threatening her reputation in academia and her bid for tenure. Gilbert reunites with Yates and, in exchange for getting the book out of publication, agrees to assist Yates and Holtzmann on a paranormal investigation.

The group witness and document a malevolent ghost, renewing Gilbert’s belief in the paranormal, but a video of their investigation is posted online and they are dismissed from their teaching positions. To continue their research, they open the „Department of the Metaphysical Examination” in an office above a Chinese restaurant, hire dim-witted but handsome Kevin Beckman as a receptionist, and start building equipment to study and capture ghosts. Meanwhile, MTA worker Patty Tolan witnesses a ghost in a subway line and contacts the Department. The group investigate, documenting the ghost and successfully testing Holtzmann’s proton containment laser, but their proof is again dismissed.

Despite the setbacks, the group continues to develop their ghost containment technology and advertise their services as what pundits are calling „Ghostbusters”. Patty joins the team, providing a historic knowledge of New York City and a vehicle dubbed „Ecto-1”. Unbeknownst to them, the ghosts are being summoned by devices built by Rowan North, an occultist attempting to bring about the apocalypse. Rowan plants another device at a live music venue, but the Ghostbusters are called in and they capture the dangerous spirit in front of hundreds of people.

When supernatural debunker Dr. Martin Heiss demands proof of the Ghostbusters’ claims, Gilbert (who resents being labelled as insane or a liar) releases the ghost from containment, and it throws Heiss out a window before escaping. The Ghostbusters are brought to see Mayor Bradley, who is trying to keep New York’s ghost problem a secret, and he publicly denounces the team as frauds. The Ghostbusters realize Rowan is planting his devices along ley lines which intersect at the Mercado Hotel in Times Square, a site with a history of paranormal activity, and discover Rowan building a portal to the ghost dimension in the hotel basement.

Rowan electrocutes himself rather than be captured, and Holtzmann deactivates the portal. Gilbert discovers a copy of her and Yates’ book among Rowan’s possessions, in which he details his plan to become a ghost and command the undead. Rowan returns as a powerful spirit, first possessing Yates and then Kevin, and returns to the Mercado to open the portal, which releases hundreds of ghosts and throws the city into darkness. The police and Homeland Security attempt to stop Rowan and are quickly subdued, but the Ghostbusters fight through the army of ghosts to reach the portal.

Rowan takes the form of the Ghostbusters’ logo, grows to enormous height and starts destroying the city. The team devise a plan to use Ecto-1’s nuclear reactor to cause a total protonic reversal, close the portal and return the ghosts to their own dimension. The plan succeeds, but Rowan drags Yates into the portal with him. Gilbert leaps into the portal and rescues Abby, and they both return to Manhattan with prematurely white hair. Afterward, the Mayor’s office continues denouncing the Ghostbusters, but privately offers to fund their research and upgrade their headquarters so they can deal with future paranormal threats. Despite the smear campaign, New York lights up with thanks and tributes to the Ghostbusters. In a post-credits scene, Tolan listens to a recording of a ghost encounter and asks the others if they have heard of Zuul.