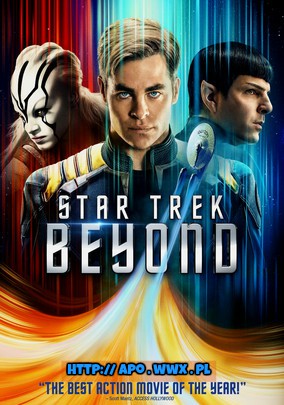 PLOT – Three years into its five-year voyage, the USS Enterprise arrives at Starbase Yorktown to replenish dwindling supplies while the crew takes shore leave. Finding his duties as Captain growing monotonous, James Kirk has applied for a promotion to Vice Admiral of Yorktown. Meanwhile, Commander Spock and Nyota Uhura have ended their relationship while Montgomery Scott struggles to keep the ship operational. When an escape pod drifts out of a nearby nebula and its occupant, Kalara, claims her ship is stranded on a planet in the nebula, the Enterprise is dispatched on a rescue mission. The rescue is an ambush as the Enterprise is attacked by a swarm of ships and sustains massive damage. The swarm’s alien commander, Krall, boards the ship in order to retrieve an alien artifact Kirk had obtained in a recent mission. The swarm rips apart the Enterprise and the saucer section crashes on the planet.

The crew is separated during the attack, with Sulu, Uhura and the surviving crew taken captive. On their search for the artifact that Kirk hides from Krall, he and Chekov discover that Kalara is Krall’s ally. When she attempts to retrieve the artifact, they activate the saucer’s still-functional boosters to evade capture; Kalara is crushed by the saucer. Meanwhile, a seriously wounded Spock and Leonard McCoy attempt to find the other survivors. Spock tells McCoy that Ambassador Spock has died, and he intends to leave Starfleet to continue the Ambassador’s work on New Vulcan. Having made it to the planet’s surface alone, Scotty meets a scavenger named Jaylah who takes him to her makeshift home, the wreck of the USS Franklin, an early-generation Starfleet vessel that went missing over a hundred years ago. With Scotty’s help, the ship is repaired to functional order, and Kirk and Chekov, and McCoy and Spock, reunite using the ship as a base. The group plans to raid Krall’s camp to rescue the crew and transport them to the Franklin and escape the planet. Meanwhile, Krall tricks a member of Kirk’s crew into handing over the artifact she had kept hidden for Kirk. Krall reveals the artifact is the missing half of an ancient bioweapon that can disintegrate a humanoid lifeform in seconds. With the device now complete, Krall intends to attack Yorktown and kill its inhabitants, and with its advanced technology go on to attack the Federation and destroy its unity.

Kirk and the others free the crew as Krall launches from his camp with the bioweapon and leads his fleet to Yorktown and the Enterprise crew pursues Krall in the Franklin. Scotty is able to transport Spock and McCoy to one of the drone ships, where they eject the crew and discover how Krall’s drone vessels coordinate. The group disrupts their communications with VHF transmissions, causing mass confusion that results in the fleet’s destruction. Krall and his three remaining officers crash in Yorktown. As Krall escapes into the city, Uhura and Kirk discover from the Franklin captain logs that Krall is actually Balthazar Edison, the captain of the Franklin. A human soldier from before the Federation’s formation, Edison became disillusioned with his life and purpose following the establishment of peace with humanity’s enemies. When he and his crew were stranded in the nebula, he became convinced he had been cast aside. Having sustained his life using the alien technology on the planet that also physically deformed him, Krall/Edison now plans to destroy the Federation in revenge for their perceived betrayal. Kirk pursues Krall to Yorktown’s ventilation system where he attempts to unleash the bioweapon on the entire station. Kirk forces Krall to an ejection hole within the Yorktown, causing the weapon and Krall to be ejected into space, where the weapon consumes Krall.

Kirk is offered the promotion to Vice Admiral, but he declines in favor of retaining his captaincy. Spock decides to remain in Starfleet and resumes his relationship with Uhura. Jaylah is accepted into Starfleet Academy on Scotty’s recommendation. As the crew celebrates Kirk’s birthday, they view the construction of their new ship, the USS Enterprise-A.

The film ends with two dedications reading: „In Loving Memory of Leonard Nimoy” followed by „For Anton”.