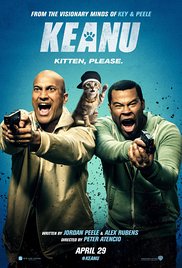 PLOT – Smoke and Oil Dresden (Jordan Peele and Keegan-Michael Key), a pair of assassins known as the „Allentown Boys”, enter a drug-processing facility run by a Mexican drug cartel and kill everyone inside, including the boss King Diaz. The pair take Diaz’s cat Iglesias, but when they are momentarily distracted by policemen arriving, the cat escapes. Meanwhile, Rell (Peele) has just been dumped by his girlfriend; he finds the cat on his doorstep, takes an immediate liking to it, and names it Keanu. Rell’s cousin Clarence (Key) comes over to cheer him up and meets Keanu as well.

Two weeks later, Clarence’s wife, Hannah (Nia Long) and daughter go out of town with the husband and daughter of a family friend, leaving Clarence alone. Rell, who is much happier after taking care of Keanu, takes Clarence out to see a Liam Neeson movie, telling him he needs to loosen up and just be himself. When the two return to Rell’s house, they find the place has been ransacked and Keanu is missing. A distraught Rell drags Clarence along to the next-door residence of his weed dealer Hulka (Will Forte), who reluctantly reveals that the 17th St. Blips, a local gang, may have raided Rell’s house instead of his. Hulka directs them to a downtown strip club; Rell and Clarence go there, where Rell convinces Clarence to adopt a „gangsta” persona in order to infiltrate the gang; they call themselves „Tectonic” and „Shark Tank”. The two meet Hi-C (Tiffany Haddish), who initially is skeptical of them, but nonetheless takes them to meet the gang’s leader Cheddar (Method Man), who mistakes them for the Allentown Boys. Cheddar has Keanu (having re-named him New Jack), and they ask for the cat. He will only do so if they come along as expert advisors for the Blips on a run to sell a new drug called „Holy Shit”; they both reluctantly agree.

After taking their team through a team-building exercise, Rell, Clarence, Hi-C, and three other gang members drive to their delivery spot. While Clarence stays behind and introduces the young men to the music of George Michael (whom he describes as if he were black, to overcome their skepticism), Rell and Hi-C go to make the sale; the buyer turns out to be Anna Faris, who is partying with two friends. Faris invites them to play Truth or Dare; she dares Hi-C to shoot Rell. When Hi-C refuses, a fight ensues in which Faris and her two guests are both shot and killed by Hi-C, frightening Rell. At the strip club after the run, Clarence accidentally smokes some Holy Shit, and experiences a drug trip in which he appears in a George Michael video, and Keanu speaks to him in the voice of Keanu Reeves. Rell begins to worry about his cousin and convinces him to just take Keanu and leave. The two do so, but are abducted on their way to their car by the actual Allentown Boys.

They tie Rell and Clarence to chairs and prepare to torture them, but Keanu claws through Rell’s ropes, allowing him to free himself and Clarence, and they grab the Allentown Boys' guns. The Allentown boys continue to approach them, but Clarence and Rell completely unload the guns into them, seemingly killing them. On their way out of the building searching for Keanu, Rell and Clarence run into the Blips; Cheddar has discovered their real identities from Hulka, and forces them to come along to a meeting with the Mexican drug cartel at its mansion in the morning. At the meeting, the Blips meet with King Diaz’s cousin Bacon (Luis Guzmán), offering Clarence and Rell as the supposed Allentown Boys, but when Bacon also demands „Iglesias”, Cheddar refuses and starts a gunfight between the two gangs. Clarence and Rell realize that the team-building exercise the two took the gang through has improved their communication; they pick up guns and shoot their way out of the mansion in pursuit of Bacon, who has taken Keanu, only for Rell to be shot in the leg and Clarence shot in the hand.

Rell – who doesn’t have a driver license – hijacks Bacon’s escape car with Bacon and Keanu in the back; Clarence gives chase in a car that belongs to Bacon’s son. The chase ends at Clarence’s house, where Rell crashes into the front yard, sending Bacon flying through the windshield. Bacon gets up and attempts to shoot Rell, but Clarence runs him over. Bacon gets up again, but is shot and killed by Cheddar and the Blips. The Blips threaten Rell and Clarence, but Hi-C – secretly a police officer – breaks her cover and forces the Blips to drop their guns. When Cheddar attempts to shoot her, she kills him. The police arrive, and Hi-C reveals that Faris and her party guests were in on the whole operation and are all still alive, but Rell and Clarence will still have to go to jail for the activities they’ve taken part in, including the killing of the Allentown Boys; she promises to testify for leniency and agrees to go on a date with Rell after they get out of jail.

Six months later, Rell and Clarence have only three weeks left on their jail sentences, but have commanded respect among the inmates – including the remaining Blips – for killing the Allentown boys. Hi-C, who has been taking care of Keanu, speaks with Rell through a visitation phone, where she reveals that she’s just been to the veterinarian and discovered that Keanu has a rare disease: he will remain a kitten permanently.

In a post-credits scene, the Allentown Boys are revealed to have survived the shooting and get back into their car.