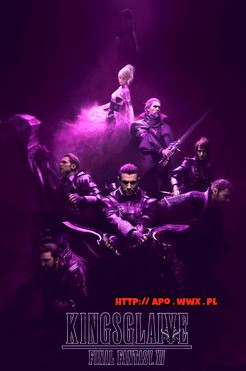 – The movie begins with Regis and Noctis—who is recuperating from his near-death experience—visiting Tenebrae. Niflheim launches an attack on the kingdom in an attempt to kill the Lucian royal family, and in the ensuing invasion the queen of Tenebrae is killed by imperial general Glauca. Regis attempts to flee with Lunafreya, but she decides to stay with her brother Ravus; both subsequently become subjects under Niflheim’s rule.

Twelve years later, the Kingsglaive fight to protect Lucis’ borders from both monsters and the attacks of Niflheim and Tenebrae. During one such operation, Nyx defies his orders to withdraw to rescue his friend Libertus from Niflheim’s Daemon war machine. Regis, seeing that the empire will eventually overcome Lucis’ defenses due to his waning power, accepts imperial chancellor Ardyn Izunia’s offer of peace: the war will end on the condition that Lucis surrender all territories beyond Insomnia to Niflheim. This causes dissension among the Kingsglaive, who feel Regis is abandoning their families. Two days before the treaty is to be signed, Kingsglaive member Crowe is sent on a mission beyond Lucis and is killed by an unknown assassin. Her death enrages Libertus, causing him to leave the Kingsglaive and join a group of Lucian rebels. At a party dedicated to the signing of the peace treaty, attended by both Regis and Niflheim’s emperor Iedolas Aldercapt, Lunafreya meets with Nyx before being secretly abducted by Glauca.

Nyx discovers this and finds that Niflheim has stationed their army outside Insomnia. Regis agrees to deploy the Kingsglaive, although their commander Drautos has disappeared. While Nyx succeeds in rescuing Lunafreya, many of the Kingsglaive turn on him; all but Nyx, Lunafreya and rebel leader Lazarus perish in the ensuing battle. At the treaty-signing ceremony, the Niflheim delegation springs a surprise attack and kills the ruling council, while secret operatives within the city allow the imperial army to enter by destroying the city’s protective barrier. Lunafreya and Nyx reach the palace just as Regis is battling Glauca. During the fight, Glauca cuts the Ring of the Lucii from Regis’s hand. Ravus attempts to put on the Ring, but it rejects him and severely burns his arm before he can remove it. Nyx, Lunafreya and Regis retrieve the Ring and flee with Glauca in pursuit. Regis forces the two to go on without him, dying in his ensuing battle with Glauca. Meanwhile, Aldercapt and Izunia—having successfully stolen the crystal—flee Insomnia.

Summoned to the city plaza by a call from Drautos, Nyx and Lunafreya are cornered by Lazarus. Lazarus almost kills Nyx before being tricked by Lunafreya into putting on the Ring, resulting in his death. Drautos then appears, but he is attacked by a repentant Libertus; during the scuffle, Drautos is revealed to be Glauca himself. Just as Glauca is about to kill the trio, Nyx puts on the Ring. He is confronted by the spirits of the past kings of Lucis; initially rejected due to being not of their bloodline, his resolve and the threat to the crystal persuade them to allow his use of their power at the cost of his life. Nyx then returns the Ring to Lunafreya before entrusting her to Libertus, telling them to flee. With the Ring’s borrowed power he engages Glauca in a titanic battle throughout Insomnia, animating the city’s statues to combat Niflheim’s Daemons. Their fight ends as dawn approaches, with Nyx severely wounding Glauca by stabbing him in the chest; Nyx dies shortly after as payment for using the Ring’s power. Libertus—now the sole survivor of the Kingsglaive—escorts Lunafreya out of the city, but she tells him to stay behind in the hope that he and Nyx can be reunited. The movie ends with Lunafreya leaving with the Ring to find Noctis.

In a post-credits scene, Noctis and his companions are en route to Altissia when their car suddenly breaks down, leading into the opening scenes of Final Fantasy XV.