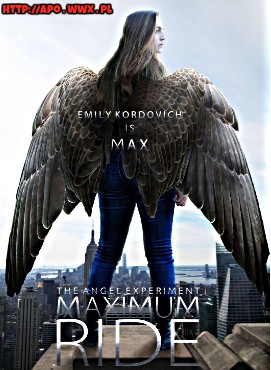 PLOT- Six children genetically cross-bred with avian DNA, complete with wings, take flight around the country to discover their origins.

Jeb wakes a young Max inside her cage and leads her out of the school to his car, where the other kids are waiting. As they drive away, Ari bursts out of the building, calling for his father.

In the present, Max runs through dark woods, fleeing searchlights. She stops at the edge of a cliff and jumps, only to wake up from her dream. She goes through the house, eating breakfast and encountering other members of the Flock. Nudge wants to leave the house and go shopping, but Max forbids it. She also confiscates a bomb that Gazzy is making.

Iggy explains that they have six months' worth of food, which may force them to leave, but Max wants to remain in the house where Jeb left them for safety. Fang says she still thinks Jeb is coming back.

Meanwhile, Angel senses voices and goes outside, where she is captured by Erasers. The Flock runs after her, but is too late. Ari, now an Eraser, beats Max off.

In a flashback, Max speaks with Ari. They talk about Jeb, and it is clear that Ari is jealous that Jeb spends more time with Max.

Max wakes up. The Flock returns to the house and reads through Jeb’s files, looking for the School’s location. They find a map. It is decided that Fang and Max will go to rescue Angel, while the others, who aren’t as fast at flying, will remain home with Iggy watching over them. However, Ari has stayed behind and is watching the house. He later comes in looking for Max, but encounters the younger three. They fight him off and Gazzy detonates his bomb. They escape, but behind them, Ari’s fist emerges from the rubble.

Meanwhile, Angel begins to cry after extensive testing and electric shocks. A mysterious scientist instructs the others to let her rest.

Max and Fang stop to eat on a rooftop in Moab, Utah, where Max hears a girl being attacked. They argue, and Fang tells Max not to intervene. Max seems to agree, but then flies down to help. At first she’s fighting well, but then she is shot in the shoulder and collapses. Fang smashes the gunman through a window and turns to help Fang; the girl, Ella, tells him that her mother is a doctor. They rush Max to the veterinary practice. When Dr. Martinez arrives, Fang hides. Dr. Martinez reluctantly operates on Max.

In a flashback, young Max is rushed through the School on a gurney, struggling against the whitecoats as they try to restrain her. She wakes up in the present in Ella’s room. She sees Fang waiting outside, but agrees to stay for breakfast.

Elsewhere, Iggy, Gazzy and Nudge are walking through a small town. Iggy has a plan to meet up with the others at Lake Mead. Gazzy realizes Nudge is gone; she has walked into a clothing store. They go back and get her, arguing, with no idea that Ari is observing them.

Dr. Martinez gives Max a checkup, noting her shoulder is already almost fully recovered. However, her X-rays are more concerning; she has a tracking chip in her shoulder, and of course wing bones in her skeleton. Dr. Martinez promises Max support; Max excuses herself. After checking her wings and cutting apart a gifted shirt to accommodate them, she rejoins Fang. The pair reach the cabin at Lake Mead, where they begin to argue. Fang doesn’t think Max should have risked herself like that; she insists that protecting Ella was the right thing to do. He tells her that he can’t lose her, but then they’re interrupted by a sound. Iggy, Gazzy and Nudge have arrived.

Max tells them about the tracking chip. They tell her about the house and about Ari, who they recognized by a scar on his face. Fang explains that Max gave him the scar with some scissors, but she doesn’t want to talk about it.

A flashback reveals that young Ari was taunting Max, calling her a monster and showing her the key card to her cage, while hiding scissors behind his back.

That morning, while everyone else sleeps, Max leaves the cabin. Ari confronts her and seems about to overpower her, but Fang grabs him, flies him into the air, and slams him into the ground. The Flock stands together, only for more Erasers to emerge from the woods. Ari turns on a noise device that causes the Flock to collapse in pain, and Max can only watch as they’re captured one by one.

They recover at the School, in cages, but are initially overjoyed to find Angel. She warns Max not to listen to „him,” just before Ari arrives, saying, “Somebody wants to talk to you, Max.”

He escorts her to an empty white room, where Jeb is waiting. Jeb offers her chocolate chip cookies, but she no longer trusts him, realizing that he never really rescued them, and their safe house in the woods was a test all along. He tells her that she was created to help people and save the world, but now that they know the truth, they must remain at the School. He shows her a note hidden beneath the cookies that says „You don’t know everything. Trust me.” He also tells her that it was Ari’s choice to become an Eraser.

Max leaves the room. She taunts Ari as he forces her back into her cage, telling him that he won’t hurt her because Daddy wouldn’t like it. In his rage, he doesn’t notice her stealing his key card.

Meanwhile, one of the whitecaps is secretly reporting on Jeb to another authority, saying that Jeb may be too emotional and attached. The woman she’s talking to says that the Flock is expendable, but dangerous and must be controlled.

Ari returns to the cage room to taunt Max, but this time Max has unlocked her cage and jumps on him, pummeling him. She hands the key card to Iggy before Ari chases her out of the room. The Flock escapes from their cages and Nudge knocks out the building’s power, while Gazzy creates a bomb.

Ari and the Erasers corner Max, only for the Flock to arrive with the bomb. Max leaps out of the way and escapes safely.

Jeb arrives, calling Ari’s name. The Flock stands there, watching. Jeb pleads with Max, telling her she doesn’t understand, but she tells him „the Experiment’s over” and opens her wings.

Afterwards, the Flock walks through the woods. They pause and Max comforts Angel, only to collapse. She sees a vision of events throughout the movie, of child Ari moving to stab her with the scissors, and of New York City. When she awakens, she describes it to the Flock and they decide to go to New York City to look for more answers.

The final shot is of a video playing over and over again, of Max’s final words to Jeb: „The experiment’s over.”