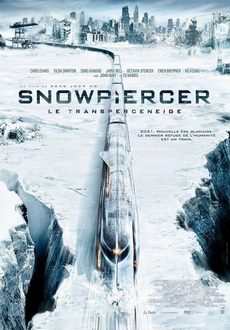 PLOT: In the near future, an experiment to counteract global warming causes an ice age that kills nearly all life on Earth. The only survivors are the inhabitants of the ‚Snowpiercer’, a massive train, powered by a perpetual-motion engine, that travels on a globe-spanning track. A class system is installed, with the elites inhabiting the front of the train and poor inhabiting the tail.

Seventeen years later, in the year 2031, the tail inhabitants prepare for the latest in a series of rebellions. Guards arrive periodically to deliver protein blocks for food, and take some of the children. During the guards’ next visit, Curtis leads the tail inhabitants in revolt, forcing their way through several train cars to the prison section. There, they release prisoner Namgoong Minsu, the man who built the doors dividing each car, and his daughter Yona. They offer him Kronal, an addictive drug, as payment for unlocking the doors.

One of the cars is filled with armed men. Under the orders of Minister Mason, the men battle Curtis’ forces; Curtis’ side prevails, and he captures Mason, but he is forced to sacrifice his second-in-command, Edgar, to do so. Mason agrees to lead the group through the high-class cars in exchange for her life. In the school car, the teacher and a henchman draw machine guns, slaughtering many of Curtis’ followers, and executing his mentor Gilliam; Curtis kills Mason for revenge.

Curtis, his few remaining followers, Namgoong and Yona, continue through the train, discovering the extravagance in which the elites have been living while the poor wallowed in squalor. One of Mason’s henchmen, Franco the Elder, kills the rest of Curtis’ followers before the henchman is himself seemingly killed. Curtis resolves to complete his mission, accompanied by Namgoong and Yona. The trio moves through the remaining cars where the elite indulge in food, partying and Kronal; Namgoong steals much of this Kronal from the inebriated revellers. As they arrive at the Engine door, Namgoong suggests they use the collected Kronal, made from explosive chemical waste, to blow open the side of the train, and escape into the outside; Namgoong explains that every year, the train has passed a crashed plane buried in snow, which has become less buried with each passing year, suggesting that the Earth is warming, and that survival outside is now possible.

Curtis explains why he must confront Wilford, creator of the train and its hierarchy. When the tail dwellers first boarded the train, they were deprived of food, water, or supplies, in crowded conditions, forcing them to turn to cannibalism. Before the introduction of the protein blocks, Curtis, had kidnapped an infant Edgar to eat him, and killed his mother, before Gilliam cut his own arm off and offered it in Edgar’s place. Namgoong resolves to use the explosive, but the engine door opens and Namgoong is shot and wounded by Wilford’s assistant Claude, who forces Curtis inside. Wilford explains that the revolution was orchestrated between himself and Gilliam as a means of population control, necessary to maintaining balance aboard the train for supplies, but Curtis was too successful and Wilford’s own losses too great, so he executed Gilliam as punishment. The aging Wilford says that he wants Curtis to replace him as the train’s overseer, while in the tail, Wilford’s henchmen execute all but 18% of inhabitants.

Meanwhile Yona and Namgoong fight off the irate partiers, and Mason’s returned henchman. Yona pulls up the floor of the engine room to reveal that Wilford is using the tail children as slave labor, to replace the train’s failing components. Outraged, Curtis sacrifices his arm to block the train gears, freeing one of the children, Timmy. Yona recovers the explosive from Claude and ignites it, before retreating into the engine with Namgoong. The damaged engine door fails to close, and Namgoong and Curtis sacrifice themselves to shield Yona and Timmy from the resulting explosive fire. The explosion sound wave causes an avalanche in the surrounding mountains that strikes and derails the train, destroying many of the cars. In the aftermath, Yona and Timmy step outside into the snow. In the distance Yona spots a polar bear, revealing that life exists outside the train..