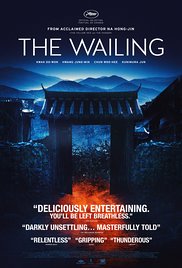 PLOT- The film opens with a view of a lake by a little village (Goksung) in the mountains of South Korea. A stranger is fishing by the river. The stranger, an old man who speaks Japanese, has recently arrived at the village, and he lives at a secluded house in the mountains by the village. A mysterious sickness starts spreading among the people of the village, causing violent murderous outbreaks followed by stupor and eventually death.

Police and doctors first suspect the victims were poisoned by wild mushrooms. Officer Jong-goo, who is investigating the cases, meets a mysterious young woman called Moo-myeong (“no name” in Korean), who tells him about the Japanese stranger and his involvement with the deaths. Later, a local hunter tells Jong-goo that he saw the stranger eating an animal in the mountains, nearly naked and with his eyes glowing red. Jong-goo dreams of the stranger, just like the hunter had described him.

Jong-goo enlists the aid of another officer and a Japanese-speaking priest (serving as translator), and they investigate the stranger’s home in the mountains. They arrive while the old man is gone, and the other officer finds pictures of the infected and murdered residents and some of their belongings. He is too shocked to say anything, and the others are unaware of his findings. The house’s guard dog breaks free of its chains and attacks the priest and Jong-goo. Soon the stranger arrives and quickly pacifies the dog. The priest apologizes to the stranger, and the three leave.

During the car ride back to the village, the officer tells Jong-goo of what he saw, and gives him a shoe he found there, which belongs to Jong-goo’s daughter, Hyo-jin. Hyo-jin becomes sick and displays the same symptoms as the other sick residents. Jong-goo, angry and frustrated, goes to the stranger’s house with the priest, but finds that the pictures and the evidence have been burned. Infuriated, Jong-goo destroys the stranger’s worship room; his dog attacks Jong-goo, who kills the dog, and orders the stranger to leave the village.

Distraught about Jong-goo daughter’s well-being, his mother-in-law seeks help from a shaman, Il-gwang. As Il-gwang performs a ceremony to exorcise the demon, Jong-goo finds his daughter in pain and interrupts the ritual, taking his daughter to a nearby hospital instead. The following day Jong-goo assembles his friends to go hunt down the stranger, believing that the old man is responsible for the sickness and murders. They drive to the stranger’s home and chase him, but he escapes. As the group leaves, they accidentally hit the stranger with their vehicle, and dispose of his body, as Moo-myeong watches from the hills.

When Jong-goo returns home, he finds that Hyo-jin’s condition has seemingly improved. Il-gwang suspects they killed the wrong person and decides to investigate Jong-goo’s home. He encounters Moo-myeong, and inexplicably starts vomiting blood. Il-gwang retreats and starts driving away, but eventually changes his mind and turns back towards Jong-goo’s house. He calls Jong-goo, telling him that Moo-myeong is the demon and that he will get to the house as soon as possible.

Jong-goo finds Moo-myeong by his house. She asks him to believe her, telling him she had set a trap for the demon, but the trap won’t work if Jong-goo goes back to his house. Confused and stressed, Jong-goo leaves to save his family, but as he crosses his home’s threshold, the floral trap withers and dries up. The priest, meanwhile, investigates the mountains again. He encounters the still-alive old man in a cave and watches him turn into a demon. Jong-goo arrives at his home and finds Hyo-jin has murdered their family. He compassionately calls out to her, but she murders him and then falls into a stupor. The shaman Il-gwang arrives at Jong-goo’s house, crosses past the wilted trap, and takes photographs of the victims. He returns to his car and drops a box filled with photos of the other victims before and after afflicted with the madness and plague.

As Jong-goo lays dying in his home, he sees visions of happier times with his daughter and assures her he will protect her.