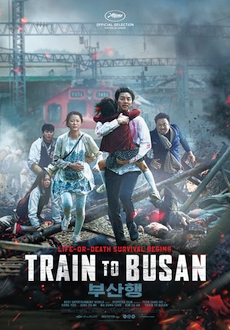 PLOT: Seok-woo is a fund manager, workaholic and divorced single father to his young daughter, Soo-an. As part of her birthday the next day, she wishes for her father to take her to Busan to see her mother. Although reluctant at first due to his work, he changes his mind after his mother shows him a video of Soo-an’s solo recital of „Aloha ʻOe” that he had skipped; his daughter did not complete her performance. On the way to the station, they nearly crash into a line of speeding fire trucks, ambulance and a police car, and notice a burning building in the distance. They board the KTX in Seoul. Others on the same train include tough working-class husband Sang-hwa and his pregnant wife Seong-kyeong; a high school baseball team; rich but selfish COO Yon-suk; elderly sisters In-gil and Jong-gil; and a frightened homeless man who knew of the situation before all of the other passengers.

As the train departs, a convulsing young woman boards the train with a bite wound on her leg. The woman becomes a zombie and attacks a train attendant, quickly spreading infection across the train. Seok-woo receives a call from his co-worker to warn him that „violent riots” have erupted in Korea. Baseball player Yong-guk, his love interest Jin-hee, and several passengers manage to escape to the upper compartments. Sang-hwa tries to barricade the door, but then realizes the zombies do not know how to open it, and merely charged at sight of humans. Seong-kyeong uses water and newspaper to cover up the windows, which tricks the zombies into thinking they are not there. News broadcasts report zombie outbreaks throughout the country. The conductor alerts everyone over the intercom that the train will not go to Cheonan, but will stop at Daejeon Station, as he was informed that the city has been placed under the military quarantine. He also informs that all passengers who arrive at Daejeon will be quarantined. Seok-woo calls his co-worker to tell him to pick him and Su-an up so they won’t be quarantined. The train stops at Daejeon, and the rest of the passengers head to the main exit, while Seok-woo, Soo-an, and the homeless man head to hallway. However, all of the surviving passengers discover the soldiers (including the riot control police stationed there) have all been infected. In the ensuing chaos, the group ends up separated from each other. Soo-an, Seong-kyeong, In-gil, and the homeless man head to the lower compartments, and they barricade themselves in the bathroom. The conductor restarts the train to head to Busan, where a successful quarantine zone has reportedly been established. Seok-woo, Sang-hwa, and Yong-guk barely manage to board the train as it departs the station.

Discovering that the surviving passengers are still trapped in the lower compartments with hordes of zombies still there, Seok-woo, Sang-hwa, and Yong-guk fight their way to the bathroom to rescue Soo-an, In-gil, Seong-kyeong, and the homeless man. During their way, they discover that zombies cannot see the uninfected people in the dark and they only react to sounds. They use this advantage to rescue the others and together they head to the first compartments. However, at the instigation of Yon-suk, the passengers block the survivors from entering, fearing that they are infected. Unable to fight off the hordes of zombies coming in, Sang-hwa and In-gil sacrifice themselves to give the others time to force open the door and enter the car. Seok-Woo demands to know why Yon-suk blocked their way, but Yon-suk lies and says that he and his companions are infected and the remaining uninfected demand that they isolate themselves in the vestibule. They all head to the vestibule, with Jin-hee joining Yong-guk. As Yon-suk and other passengers proceed to block them in, Jong-gil looks at her zombified sister In-gil and is surprised at what she had done to herself. Angry at Yon-suk and unable to accept her fate, Jong-gil opens up the door, allowing the hordes of zombies to enter and infect the rest of the surviving passengers in the car.

The conductor receives a call from Busan to warn that the city has managed to fight off the zombie infection. A blocked track at the East Daegu train station forces the survivors to stop and search for another train. In the process, Seok-woo, Seong-kyeong, Soo-an, and the homeless man are separated from Yong-guk and Jin-hee. Yon-suk, who survived with a train attendant by hiding in the bathroom, manages to escape by pushing the attendant into the zombies. Entering the train where Yong-guk and Jin-hee are hiding, Yon-suk slams Jin-hee out of the way in a panic to reach the other door, where she is bitten by a zombie. Heartbroken, Yong-guk stays with Jin-hee and is bitten when she turns. The train conductor starts a locomotive on another track but is killed by zombies while trying to aid Yon-suk. The homeless man sacrifices himself to let Soo-an and Seong-kyeong escape with Seok-woo onto the running train. They encounter an infected Yon-suk in the engine room. Yon-suk turns and Seek-Woo fends him off but is bitten in the hand before he manages to throw him from the train. He puts Soo-an and Seong-kyeong inside the engine room, instructs Seong-kyeong on how to control the engine and shares his last words with his daughter before moving outside. As he zombifies, he remembers of the first time he held his daughter in his arms, and throws himself off the locomotive with a smile.

The train is soon stopped by a blockade, forcing Soo-an and Seong-kyeong to walk through a tunnel. On the other side, soldiers are stationed at a checkpoint to defend the perimeter against zombies. Unable to see Soo-an and Seong-kyeong clearly in dark, the soldiers are instructed by their commander to shoot them both. Right before the trigger is pulled, the soldiers faintly hear Soo-an tearfully singing „Aloha 'Oe”. Realizing they’re survivors, reinforcements are sent out to help them.