B. Affleck, A. Kendrick 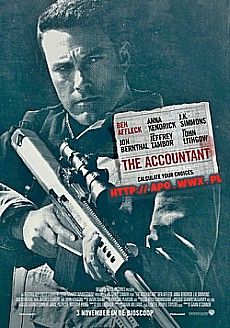 PLOT-  Christian Wolff is a mathematical genius who works as a forensic accountant at ZZZ Accounting in Plainfield, Illinois, tracking insider financial deceptions for numerous criminal enterprises brokered to him by a mysterious figure known as „The Voice”, who contacts him by phone. As a child, Christian was diagnosed with autism and offered an opportunity to live at Harbor Neuroscience Institute in New Hampshire. Although Christian had bonded with Justine, the mute daughter of the institute’s director, his father declined, believing that Christian should overcome the hardships inherent in his condition rather than expect the world to accommodate to them. The pressure of raising a special needs child drove Christian’s mother to abandon him and his younger brother, Braxton, who were left with their father, a decorated military officer who arranged for them to receive extensive training in martial arts and sharpshooting, among other combat skills.

Christian is being pursued by Raymond King, the director of financial crimes for the Treasury Department, who knows Christian by the alias „The Accountant”. King recruits young analyst Marybeth Medina to help him identify and arrest the Accountant prior to his retirement, threatening to expose Medina’s unfiled criminal past if she refuses. King’s only leads are Christian’s numerous cover names and a recording of a shootout in which several members of the Gambino crime family were killed, which King believes was perpetrated by the Accountant.

To elude King, the Voice arranges a legal assignment for Christian, auditing state-of-the-art robotics corporation Living Robotics, whose in-house accountant, Dana Cummings, has found suspicious financial discrepancies. The company’s CEO, Lamar Blackburn and his sister and associate Rita Blackburn willingly cooperate with Christian’s investigation, while CFO Ed Chilton dismisses Dana’s findings as a mistake. Christian and Dana work together to discover that $61 million dollars have been embezzled from the company and in the process they build a rapport.

Chilton is confronted by a hitman known as „The Assassin”, who threatens to kill both Chilton and his wife and make it look like a home invasion in which his wife would be assaulted, unless Chilton, who is diabetic, self-administers a fatal insulin overdose. Lamar surmises to Christian that Chilton embezzled the money and was driven to suicide out of guilt, and Rita closes the investigation, leaving Christian distraught as he had not completed his study. Meanwhile, Medina realizes Christian’s cover identities, including his current name, are all famous mathematicians and isolates his voice from King’s recording, determining that Christian is muttering the nursery rhyme Solomon Grundy to himself, a behavior consistent with autism. The trail leads her to the modest accounting office that Christian uses as a cover, and she learns that Christian has written off hefty tax returns with donations to the Harbor Neuroscience Institute.

Christian and Dana are targeted for assassination, but Christian is able to neutralize his pursuers and rescue Dana. While hiding, they find out that the embezzled money was reinvested in affiliated companies, raising Living Robotics’ stocks. Concluding that Rita is behind everything, Christian goes to her house only to find her dead at the hands of the Assassin, who escapes just as Christian is arriving, exposing Lamar as the true mastermind.

King and Medina arrive at Christian’s house and find evidence that he is the Accountant. King reveals that Christian was arrested after an incident at his remarried mother’s funeral that led to his father’s death, taking a bullet meant for Christian. In jail, Christian was mentored by Francis Silverberg, a former accountant and fixer for the Gambino crime family, before being recruited as an informer for the United States government. Silverberg was later released and then tortured to death by the Gambino family, which led to Christian escaping to exact revenge on the people responsible.

King confides to Medina that he was present at the shootout and that Christian spared his life after questioning him about being a „good father”, after which King was contacted by the Voice and provided with evidence compiled by Christian on criminals who violated his moral code, helping him rise to his position of director. King reveals that the investigation on the Accountant was a test for Medina, who has been selected to replace King after his retirement as the Voice’s contact within the Treasury Department.

Christian assaults Lamar’s mansion, which is protected by an army of mercenaries led by the Assassin. During the resulting shootout, the Assassin recognizes the nursery rhyme that Christian is muttering to himself and confronts him, revealing himself to be his brother Braxton, with whom Christian had a falling-out after their father’s death. After a brutal fight, the two come to terms, and Braxton stands aside as Christian kills Lamar. The Voice later relays Christian’s evidence on Lamar’s criminal activities to Medina, who has accepted King’s offer and dismantles Living Robotics. Christian then bids farewell to Dana and leaves to find Braxton, while at the Harbor Neuroscience Institute, an adult Justine continues to monitor him with a cutting-edge super-powered computer purchased by Christian, revealing herself to be the Voice.