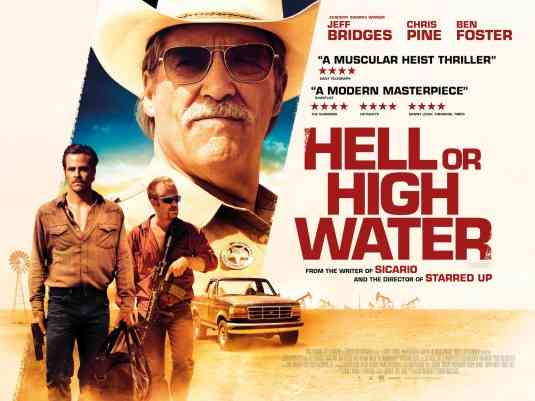 – In West Texas, divorced father Toby Howard (Chris Pine) and his ex-con brother Tanner (Ben Foster) carry out early morning robberies of two branches of the (fictional) Texas Midlands Bank. They plan to commit several small-scale bank robberies over the course of a few days. Though the robberies are well-planned, Tanner’s wild nature leads to him taking unnecessary risks, frustrating Toby. It is revealed that their mother has recently died, leaving their ranch in debt due to a reverse mortgage, which, if not paid off in a few days, will result in foreclosure on the property. Toby is determined to pay off the mortgage and, because oil has recently been discovered on the land, he plans to sell the oil rights in order to pay for a comfortable life for his estranged sons.

Two Texas Rangers, Marcus Hamilton and Alberto Parker, are sent to catch the robbers. Hamilton, who is close to retirement, quickly determines the brothers’ methods and personalities. Meanwhile, Tanner robs another bank while Toby unknowingly waits at a nearby diner. After a third escape, they take the stolen money to an Oklahoma Indian casino to be laundered. They exchange the stolen bills for chips and Tanner plays Texas hold ’em, winning more chips. Toby then has the casino convert them into a check made out to the Texas Midlands Bank – the same bank whose branches they stole from in the first two robberies. With untraceable funds and gambling as a cover for how they were acquired, the brothers head back to Texas to obtain more.

Hamilton initiates a stakeout of another branch of the Texas Midlands Bank. The brothers do not show, and Hamilton deduces a pattern to the robberies and determines their next target. Hamilton and Parker are en route when the final robbery indeed occurs there. Tanner decides to continue the heist even though the bank is full of customers, many of whom are carrying weapons, and a shoot-out ensues when a security guard fires at the brothers. Tanner kills the guard and an armed customer to effect their escape, and Toby is wounded.

As the brothers race out of town, several of the armed townspeople pursue in their own vehicles. After gaining some distance, Tanner stops and fires an automatic rifle at the pursuing „posse,” causing them to turn back. The brothers then split, with Toby taking the money and departing in a second vehicle left just outside of town, while Tanner turns around to confront the Texas Rangers and local law enforcement. To give his brother more time to escape, he draws the lawmen off the trail to a desert mountain ridge and takes potshots with a sniper rifle, killing Parker. Furious, Hamilton calls in the SWAT team, then uses a local resident’s knowledge of the area to sneak to a nearby ridge behind Tanner. Borrowing the local’s rifle, he takes Tanner out with a single long-range shot.

During the standoff, Toby manages to pass through a law-enforcement checkpoint without them noticing his bloody bullet wound and makes it back to the casino where he is able to launder the rest of the stolen cash. While he is at the casino he sees a news report of his brother’s death. He delivers the casino’s checks to the bank in time to prevent the ranch’s foreclosure.

Some time later, after Hamilton has retired, he returns to his former post to learn that the Rangers have cleared Toby as a suspect, as his record is clean and he has no motive to steal since the new oil wells earn more in a month than the total from all of the robberies. The money from the oil wells is deposited at the Texas Midlands Bank, and it is stated that they have not co-operated with the investigation into the robberies for fear of losing management of his family trust fund. It is also revealed that Tanner’s prison sentence resulted from his killing of their abusive father in a „hunting accident”. Hamilton confronts Toby at the ranch, and makes it clear that he knows that the brothers were partners in the robberies and that Toby had masterminded the entire scheme, despite what the Rangers and the banks say. Without explicitly admitting culpability, Toby explains his motivations in wanting to keep his sons from experiencing a life of poverty similar to his own, comparing it to an inherited disease. Both men are armed, and Hamilton affirms Toby’s right to self-defense while on his property, but the tension between them is broken when Toby’s ex-wife and sons arrive and Hamilton realizes Toby gave the farm and its profits to them. Hamilton departs, as Toby suggests that they meet again soon to finish the conversation, each of them implying that they may try to kill the other when the time comes.