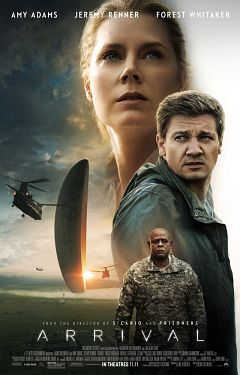 – The film begins with a sequence of linguist Louise Banks (Amy Adams) with her daughter, who dies of a rare type of cancer while still young. One day, twelve mysterious extraterrestrial spacecraft, nicknamed „shells” by the U.S. military, appear across the Earth, and Louise is invited by a US Army Colonel named Weber (Forest Whitaker) to join a special team created to analyse the alien species at the US site in Montana, due to her skills in translation and her existing high level security clearance in order to uncover the reason for their arrival on Earth. Her team includes theoretical physicist Ian Donnelly (Jeremy Renner). Inside the shell the team makes contact with two cephalopod-like aliens, which they call 'heptapods' because they have seven limbs. Ian nicknames them Abbott and Costello.

Louise decides that two-way communication in the aliens' spoken language would be impossible. However, she discovers that they can communicate using their written language, which is based upon complicated circular symbols with inter-related components. With Ian’s help she begins to learn the symbols that correspond to a basic English vocabulary, hoping to build understanding so that she can eventually ask why the aliens have come to Earth. As Louise begins to become more proficient in the alien language, she starts to see images of herself with her daughter, both while communicating and later, as dreams.

When Louise feels herself proficient enough in the alien language to ask the aliens what they want, they answer with a symbol that translates as „offer weapon”, with similar translations, like „use weapon” being deduced at other sites. As other nations, which had initially all been sharing their data and analysis, translate their versions of the message, they close down communication with each other, with some of them starting to scramble their military, believing that the message indicates a threat. Louise believes that, due to the difficulty of translating the language’s complex structure, the „weapon” element of the symbol might have an alternative meaning, such as „tool”.

Rogue soldiers take matters into their own hands and plant a timed C4 explosive device within the shell. Louise and Ian are unaware of the device and go back into the shell, to communicate with Abbott and Costello again. Costello guides Louise to write one of their symbols on the barrier, and then both Abbott and Costello fill the screen with hundreds of smaller symbols. The device continues to count down as the rogue soldiers engage in a firefight with troops from the command centre. Costello leaves just before the device explodes, but Abbott stays behind long enough to push Louise and Ian out of the communication chamber. They wake up in the base camp with concussion, as the shell moves out of reach higher into the sky. Ian analyzes the pattern of symbols that the aliens had displayed to establish that it relates to the concept of time, and that what they had received was one twelfth of it. Louise and Ian then realize that the other nations must obtain the remaining pieces of the pattern from the other shells and cooperate among themselves to assemble it.

Meanwhile, the Chinese military makes preparations to attack their shell, followed by those from Russia, Pakistan and Sudan. General Shang (Tzi Ma) of China announces that the Chinese military will destroy their shell if it does not leave within twenty four hours. Louise rushes back to her shell, which sends down a shuttle that takes her inside, and she meets Costello, who communicates that Abbott is dying. When Louise asks about her visions of a child, Costello tells her that she is seeing the future, revealing that the visions and dreams are not flashbacks but flash-forwards. Louise foresees that her future daughter’s father will leave her abruptly, when she tells him something that had been secret, and he thinks she had „made the wrong choice”. Costello tells Louise that their purpose on Earth is to 'help humanity' by sharing their language and its power to change the perception of time, which is 'weapon' or 'tool' they were offering, and the aliens have foreseen that in 3000 years they will require humanity’s help in exchange.

When Louise returns to the camp, it is being evacuated in anticipation of retaliation after the Chinese attack, which is imminent. Louise has a new vision, of being at a United Nations party to commemorate the aftermath of the alien visit 18 months afterwards. She sees herself being thanked by General Shang for having convinced him to change his mind and suspend the attack in China. When she asks how, Shang explains that she had called on his private mobile number, which he then shows her, saying that he feels it important that he does so, without understanding why. Back in the present, Louise steals a satellite phone from the base and calls Shang, but realises that although she speaks Mandarin Chinese she doesn’t know what to say. Her vision continues with Shang saying that she had convinced him by repeating his dying wife’s last words, which he tells to Louise in the vision. Louise is then able to give Shang these words in the present, and so persuades him to recall his military. A Chinese press conference is broadcast and the other international forces also stand down. The shells then dematerialize into thin air, as the nations once again share the information they have learned.

When packing to leave the base, Ian admits his growing love for Louise. The film closes as they discuss life choices and whether you would change them if you could see the future. Louise sees another vision of Ian as the father of her daughter, called Hannah (because the name is a palindrome), who she already knows will have her life cut short by an incurable disease. Her vision continues with Ian asking her, further into the future, if she wants to make a baby. Louise sees herself, despite knowing what will happen, replying „Yes”, wanting to share a short time with her future child rather than prevent her ever from existing.