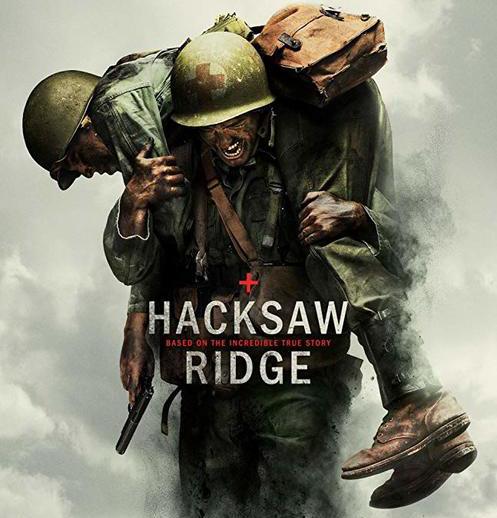 PLOT – While growing up in Lynchburg, Virginia, young Desmond Doss nearly kills his brother Hal, hitting him with a brick. This traumatizing experience, along with a talk from his religious mother, firmly reinforces his belief in the Sixth Commandment of the Old Testament. Years later, Doss saves a man who becomes injured by a car and while taking the man to hospital, is instantly smitten with a nurse, Dorothy Schutte. They soon begin dating and fall in love, and Doss begins to learn about medicine from her work.

With the majority of his town, including his brother, enlisting in the Army to fight in World War II, Doss is motivated to sign up as well. His father, a troubled veteran from the First World War, is deeply upset as he expects to lose his sons just as he lost his boyhood friends. Because of his beliefs as a conscientious objector, Doss intends to serve as a medic. Before he leaves for training at Fort Jackson, South Carolina, he asks for Dorothy’s hand in marriage, and she accepts. Doss is placed under the command of Sergeant Howell, and while he excels physically, he immediately becomes an outcast among his fellow soldiers when he refuses to handle his rifle nor train on Saturdays, as he is a Seventh-day Adventist. After Howell and Captain Glover fail to get Doss discharged for psychiatric reasons, Howell worsens Doss' conditions by putting him through grueling labor and turning his fellow soldiers against him by mistaking his beliefs for cowardice, intending to get Doss to leave of his own accord. Despite being beaten one night by his fellow soldiers, he refuses to disclose his attackers and continues training.

Doss' squad is temporarily released from training, and Doss intends to marry Dorothy, but he is arrested for insubordination for his refusal to carry a firearm. Dorothy visits Doss in jail, and tries to convince him to declare a guilty plea in his upcoming trial so that he can be released without charges, but Doss is still unsure, not wanting to compromise his beliefs. At his trial, Doss pleads not guilty, and before he is to be sentenced, his father barges into the courtroom with a letter from his former commanding officer stating that his son’s refusal to carry a firearm is protected by the US Constitution. The charges against Doss are dropped, and he and Dorothy are promptly married.

Doss and the unit is assigned to the 77th Infantry Division and are sent to the Pacific theater to participate in the Battle of Okinawa, where the Americans must climb the cliff face of the Maeda Escarpment, nicknamed „Hacksaw Ridge”, to take on the Japanese forces stationed there. In the initial fight, losses are heavy on both sides, and Doss is successful in saving several soldiers, including ones whose injuries appear too severe for them to survive. The Americans bivouac for the night, and Doss spends the night in a foxhole with Smitty, a squad mate who was the first to call Doss a coward. Doss tells Smitty that he nearly shot his drunken father after he threatened his mother with a gun, revealing his aversion to holding a firearm. Smitty apologizes for doubting his courage and the two make amends.

The next morning, the Japanese launch a massive counter-attack and drive the Americans off Hacksaw. Smitty is killed and many Americans, including Howell and several of Doss' squadmates, are injured and left on the battlefield. Disheartened, Doss hears the cries of the dying soldiers and decides to run into the carnage instead of away from it. He spends the entire day and night carrying wounded soldiers to the cliff’s edge and rappelling them down on rope while praying to try to save more, much to the shock of several men stationed below. When day breaks, Doss rescues Howell and the two finally escape Hacksaw under enemy fire.

Captain Glover tells Doss that the men have been inspired by what they are calling his miracle, and that they will not launch the next attack without him. Despite the next day being Doss' Sabbath day, he joins his soldiers along with extra reinforcements, and with their help, they begin to win the battle. During an ambush set by a falsely surrendering group of Japanese, Doss manages to save Glover and others by knocking their grenades away with his bare hands. Doss is wounded by the blast of one grenade, but the battle is won. Doss is safely lowered down the cliff, clutching the Bible Dorothy left for him.

Pre-credit text reveals that Doss ended up rescuing over 75 soldiers at Hacksaw Ridge, and was awarded the Medal of Honor, the first time in history it was given to a conscientious objector. Doss stayed married to Dorothy until her death in 1991, and he himself died on March 23, 2006 at the age of 87.