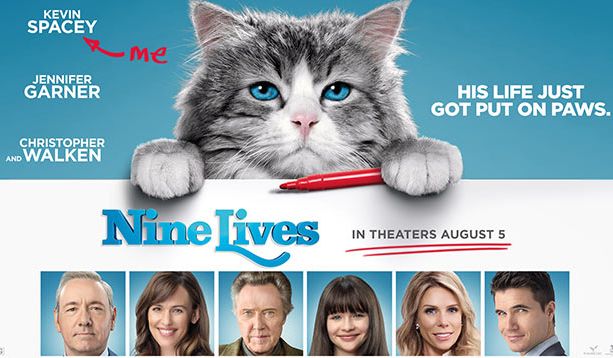 PLOT –  Tom Brand (Kevin Spacey) is a major business tycoon in New York City whose workaholic attitude ruined his first marriage and caused a rift between him and his adult son David (Robbie Amell) who now works for him and strives for his approval. He now lives with his second wife Lara (Jennifer Garner), who is a little more tolerant of the fact that he is never at home, and his daughter Rebecca (Malina Weissman). His eponymous company FireBrand is nearing completion on its greatest achievement to date: the tallest skyscraper in the northern hemisphere that will be the new headquarters.

His daughter’s 11th birthday is coming and she has always wanted a cat, but Tom has always refused as he hates cats. Not wanting to disappoint her in a rush to get a last-minute present for his daughter’s birthday, the GPS directs him to a mysterious pet store called Purr-kins brimming with odd and exotic cats. The store’s eccentric owner Felix Perkins (Christopher Walken) tells him he doesn’t pick the cat, the cat picks him. The tomcat that picked him is called Mr. Fuzzypants. Tom is on his way home for the party when he decides to see Ian Cox (Mark Consuelos), one of the top managers of the company in charge of the new building, as he learns that another building in Chicago will be taller. They have an argument while on the roof that ends with Brand firing Cox, but there’s a storm and Brand is blown off the building along with the cat. He is going to fall to the ground but plummets off the side of the skyscraper, his leg gets snagged on some stray equipment and gets flung back inside through a window as he passes out. When he wakes up, he realizes that while his human body is in the hospital in a state of coma, his consciousness is trapped inside the cat’s body.

Felix goes to visit him. Apparently he is able to talk to him and knows what happened. He is told by Felix that he must reevaluate his priorities, connect with his family, and avoid past mistakes within one week or else be stuck as a cat forever. Lara and Rebecca take him home. Mr. Fuzzypants acts in an odd and stubborn way to try to convince his wife and daughter that he’s actually Tom. This only drives them mad and he slowly comes to see how much he has ignored his family. He also learns that Ian is trying to take the company public with the help of the board of directors to take power from Tom, even though David is trying to stop him.