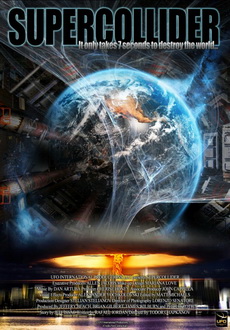 PLoT: After the Hadron Super Collider in Switzerland and France, few thought anyone would ever attempt a larger Collider but Cytron Corporation, with a consortium of companies, built it. The Eisenberg Collider, called EC-1 was over 60 kilometers long, nearly triple the Hadron. Its mandate was to create a new energy source to power the world.

Dr. Victor Borkan considered himself the luckiest man alive to head the new Collider located in the desolate South Eastern desert of Oregon. His only regret was that his family was less than thrilled with living in a town with 1 store and 2 gas stations. But his wife Julie, his daughter Michelle, and son Eric were used to it. They were a loving family and supported each other as their father pursued his career on the cutting edge of science. Doctor Borkan also believed that it would all change after the first full power test of the EC-1 Collider. Then this sleepy town in the middle of nowhere would become the new energy Mecca of the world…. that is until he began to wonder why the test had never happened… or had it?

On September 9th, 2013 at 9:05AM the first test of the EC-1 Collider was about to commence…. at 9:06AM, that same day, the test was classified as permanently delayed; the program was to be shut down due to lack of funding. What had happened… or what happened that had changed everything?

Victor Borkan knew that something was different, throughout the world there was now a series of disasters, entire country’s infra-structures were collapsing. Power stations going off line and crop failures. The press said that it had been the result of years of neglect and inherent problems with systems. People were talking as if the entire planet was heading towards Armageddon … But Borkan knew it was something else. This wasn’t right. When he tried to explain his feelings to his fellow scientists he sounded crazy… maybe he was.

At home, Borkan felt his family was different. His wife no longer loved him, she planned to divorce him and take the children as soon as the school year ended. His children were now changed; cold and indifferent towards him. At the EC-1 Facility Borkan began to research the data and he saw something. It was then that Borkan realized that the experiment on September 9th had taken place. In that nano second anti matter particles had been created and rather than just collapsing as expected, they actually created a momentary black hole that had actually shifted the entire timeline of the world 7 seconds. But how did this 7 second shift change the world? As he dug deeper he saw it- a series of chain reactions; Construction projects failed due to miscalculations.

Engineering disasters were abound from the shifts while the Earth’s Tectonic plates that would have relieved pressure in that 7 seconds built up causing earthquakes and tsunamis. At a human level, the most simple things like someone responding to a question, such as „do you love me?” had now not been answered, forever changing relationships across the planet. Now throughout the world this shift had put everything out of balance.

A Nuclear Power plant had exploded in France. A dam had collapsed in Peru and Victor Borkan had to convince the powers that control the Supercollider to reactivate it so he could try and re-shift the Earth’s timeline back into place before the planet is destroyed, spinning out of balance.