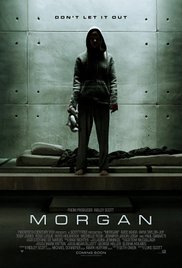 PLOT: Lee Weathers (Kate Mara), a stern and self-contained young woman, is a risk-assessment specialist from a company that funds research projects devoted to creating artificial human beings. She is called in to investigate an incident involving one of their experiments. The company dispatches her to a remote location where one of the company’s most promising projects, a human hybrid called Morgan (Anya Taylor-Joy), has violently lashed out at one of the scientists, Dr. Kathy Grieff (Jennifer Jason Leigh), after having a „tantrum”, in which she stabbed her in the eye with a pen. Over dinner with the scientists, Lee (who is revealed to be fluent in Chinese) discusses a previous incident at Helsinki with the lead scientists Dr. Lui Cheng (Michelle Yeoh) and Dr. Simon Ziegler (Toby Jones), in which most of the team of scientists were killed.

After Morgan violently kills a psychologist, Dr. Alan Shapiro (Paul Giamatti), who taunted and provoked her in an interview, Lee realizes that Morgan is too unpredictable, especially given her enhanced intelligence and strength, and must be terminated. The scientists, who have raised Morgan from birth (five years ago, owing to her enhanced growth rate) have grown attached to her and cannot bring themselves to kill her. As Lee is about to do so, the scientists inject her with sedative and imprison her in the glass cell in which Morgan had been held. They plan to escape with Morgan, who instead kills them and kidnaps her favorite handler, Dr. Amy Menser (Rose Leslie). In the scientists' house, Cheng is recording an apology for the failure of the experiment, in which she hints that they were attempting to develop a creation with more human emotions, only to find that the result was harder to control. After she has finished, Morgan enters the room and suffocates her.

Lee escapes from her cell and enters the house to confront Morgan. Morgan attacks her and, after a fall from an upstairs window which should have disabled both of them, Morgan flees in a vehicle with Dr. Menser into the woods. Lee pursues the pair, and Morgan runs Lee’s car into a tree. Skip Vronsky (Boyd Holbrook), the cook for the team, uses his vehicle to pick Lee up and continue chasing Morgan and Menser. Lee locates the vehicle they were using and instructs Skip to wait for her by their car, continuing alone. Morgan and Lee have a final showdown, seemingly matched in strength and speed. Finally, Morgan overpowers Lee and impales her on the branch of a fallen tree, seriously injuring her. Morgan leaves her to bleed out, only for Lee to miraculously survive, catch up to Morgan, and drown her in a nearby lake. Lee shoots the surviving handlers, Menser and Vronsky, getting rid of any witnesses to what happened.

The executives at the company that is responsible for funding Morgan’s creation are sitting in a conference room while calmly discussing what happened. It’s then revealed that Lee is actually an earlier prototype of the human hybrid, and has been the „perfect” artificial human all this time. Lee is shown making a submissive gesture with her hands, the same way that Morgan had when Dr. Shapiro asked her how she felt about injuring Dr. Grieff.

« Harley and the Davidsons
Czerwony kapitan / The Red Capitan »