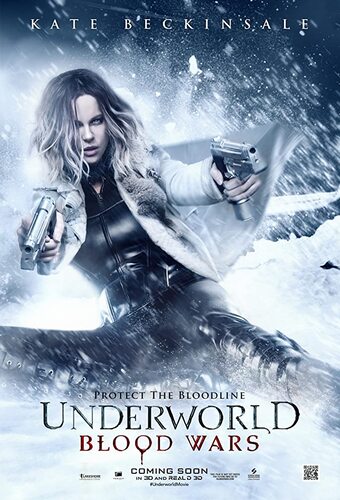 PLOT: The remaining vampire covens are on the verge of being wiped out by the Lycans. Both species are searching for Selene: the vampires seeking justice for the deaths of Viktor and Marcus, and the Lycans, led by Marius, intending to use her to locate Eve, whose blood holds the key to building an army of vampire-werewolf hybrids.

Semira, a council member of the Eastern Coven, wishes for Selene to be granted clemency so that the latter can train the Eastern Coven’s neophyte Death Dealers. To that end, she enlists Thomas to plead Selene’s case before the full council. Thomas succeeds and Selene arrives at the Eastern Coven with David. Selene is betrayed by Varga, Semira’s ally and lover, who poisons the former and slaughters the Death Dealers at the behest of Semira, who then begins draining Selene of her blood, which Semira intends to drink and gain her power, but is interrupted when Thomas and David come to her rescue. In the ensuing fight, Thomas is killed delaying Semira and Varga so that David can escape with an incapacitated Selene. During the escape, Semira and Varga are shocked to observe that the pair is immune to the effects of sunlight.

The pair seeks refuge with the Nordic Coven. They are pursued by Alexia, an Eastern Coven vampire dispatched by Semira, who consumes the blood from Selene and appears to be strengthened by its ingestion. Selene and David arrive at Vador, the stronghold of the Nordic Coven, where Vidar, the Elder, reveals that David was the son of the High Elder Amelia, making him the legitimate heir to the Eastern Coven.

The Nordic Coven is attacked by Marius and the Lycans, who were alerted by Alexia, Marius’s mole and lover. The Nordic vampires, led by Vidar’s daughter Lena, fight with Selene and David. Selene engages in single combat with Marius, who demands to know Eve’s location; Selene insists she does not know the location, being confirmed by Alexia by tasting some of Selene’s blood. Marius sounds the retreat for his troops and Selene, no longer wishing to live, slides herself under the now-broken ice of the lake.

Upon Alexia’s return to the Eastern Coven’s castle, she informs Semira of the events at the Nordic Coven. Semira kills her, revealing to have always known of Alexia’s treachery. David returns to the Eastern Coven and informs the Elite Council of his parentage, presenting himself as the rightful heir to the coven. Semira is arrested by none other than Varga, whose ultimate loyalty is to the rightful leadership of the coven. She is subsequently imprisoned in the dungeons. The coven comes under attack by Marius and his forces. The Lycans blow holes in the castle’s walls, letting in sunlight, killing most of the vampires. David continues fighting, only to find himself face to face with Marius. Selene suddenly reappears, wearing a Nordic appearance and coat over her normal Death Dealer uniform. It is revealed that the Nordic Coven revived her and in doing so enabled her to develop new abilities. She swiftly begins dispatching the Lycans, as the rest of the Nordic Coven, led by Lena, join the fight. While Selene is making her way through the castle, the guards in the dungeons are killed by Semira, who then escapes from her cell. Selene and David find Marius, but David is waylaid by Semira. As Marius and Selene’s fight continues, a drop of Marius’s blood lands on Selene’s lips. She is suddenly flooded by a series of blood memories in which Marius finds Michael. She sees Marius capturing Michael and slitting his throat in order to collect his blood and consume it. Believing that Michael is dead, she bites her own wrist, using her own blood memories of the time she has spent with Michael, Eve, and David to fuel her rage. Although Marius has transformed, Selene rips out his spine, killing him instantly. David manages to kill Semira. He shows Marius’s severed head to the Lycans, who decide to retreat.

In the aftermath, Selene, David, and Lena are chosen as the new Elders. It is revealed that after being resurrected at the Nordic Coven, Selene was reunited with Eve.