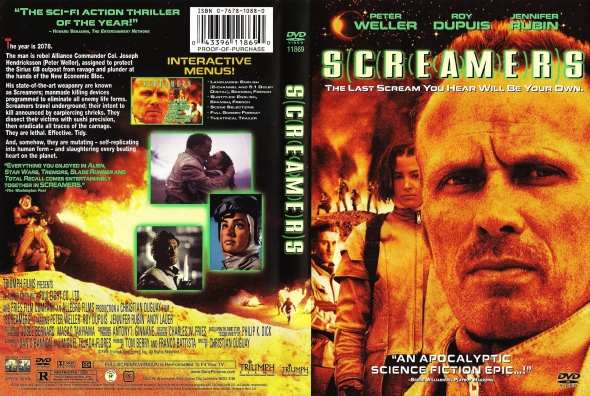 «PLOT» The year is 2078. The planet Sirius 6B, once a thriving mining hub, has been reduced to a toxic wasteland by a civil war between the mining company, known as the New Economic Bloc (NEB), and the Alliance, a group of former mining and science personnel. Five years into the war, Alliance scientists created and deployed Autonomous Mobile Swords (AMS) — artificially intelligent self-replicating machines that hunt down and kill NEB soldiers on their own. They are nicknamed „screamers” because of a high-pitched noise they emit as they attack. Screamers track targets by their heartbeats, so Alliance soldiers wear „tabs” which broadcast a signal canceling out the wearer’s heartbeat and rendering them „invisible” to the machines.

A fragile stalemate is in effect between the two exhausted, poorly supplied, and undermanned armies. A message guaranteeing safe passage through NEB territory to discuss a truce is recovered from a dead NEB soldier, killed by screamers as he approached the Alliance compound. When Alliance commanding officer Joe Hendricksson (Weller) reports this development to his Earth-based superiors, he is told that such a meeting won’t be necessary; peace negotiations are already underway on Earth. Not true, says Private „Ace” Jefferson (Andrew Lauer), newly arrived from Earth. Hendricksson is not surprised, as he suspects that both sides have simply written off Sirius 6B and abandoned their armies.

Hendricksson decides that the only realistic chance of survival for himself and his soldiers is to accept the NEB truce offer. He sets out for a meeting with the NEB commander, accompanied by Jefferson. While traveling through a destroyed city they come upon a war orphan, a young boy named David (Michael Caloz), clutching a teddy bear. Unwilling to abandon a defenseless civilian, they bring the boy along. The following night they are attacked by a reptilian screamer that they have never before encountered. Hendricksson is alarmed that their Alliance tabs did not protect them.

As the group nears the NEB compound, two enemy soldiers, Becker (Dupuis) and Ross (Charles Powell), open fire on David, whose chest explodes in a shower of gears, bolts, and wires. They explain to the astonished Alliance men that David was a new „type 3” screamer impersonating a human. Most of the NEB contingent has been wiped out by another „David” screamer that a patrol unwittingly brought into the base; Becker, Ross, and a black marketeer named Jessica (Rubin) are the only survivors.

The group heads to the NEB command center but finds only an empty building and large pools of blood. Locating the mainframe computer, Hendricksson learns that the NEB truce offer was just as false as the Alliance message from Earth. The group retreats to the NEB bunker, pursued by „Davids”. The discovery of screamers indistinguishable from humans and immune to Alliance tabs leads to paranoia and distrust. Becker becomes convinced that Ross is a screamer and kills him, only to discover that he was human. The four survivors retreat to the Alliance base, only to find that the „Davids” have gained entrance to that compound as well, with equally devastating results. As dozens of „Davids” pour out of the bunker’s entrance, Hendricksson fires a micro-nuclear missile into the bunker. Jefferson rushes to the aid of Becker, who was apparently injured in the blast, but Becker’s cries of distress are a ruse — he is a „type 2” screamer, and he kills Jefferson. After Hendricksson destroys Becker, only he and Jessica remain.

Now quite paranoid, Hendricksson worries that Jessica could be a screamer as well. He slashes her hand, and is relieved to see blood dripping from the wound. They locate an emergency escape shuttle, but it can carry only one person. Hendricksson offers the shuttle to Jessica; but a second „Jessica” arrives, confirming that she is a screamer after all, and even more human-like. Hendricksson resigns himself to death; but to his surprise, Jessica shields him, then sacrifices herself in battle with her lookalike. With her last breath, Jessica confesses her love for Hendricksson.

Hendricksson departs for Earth on the escape shuttle with a single souvenir, the teddy bear carried by the original „David”. As the screen fades to black, the bear slowly begins to move on its own.