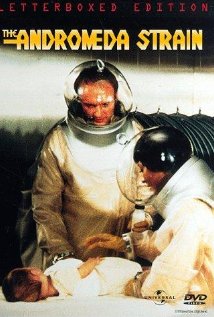 PLOT: After a U.S. government satellite crashes near the town of Piedmont, New Mexico, almost all of the town’s inhabitants die instantly. Suspecting the satellite brought back an alien germ, the military activates an elite scientific team it had previously assembled for just this type of emergency.

Dr. Jeremy Stone, the team leader, and Dr. Mark Hall, the team surgeon, are dropped in Piedmont by helicopter, where they search the town for the project „Scoop” satellite in space-suit-type protective uniforms. In a primitive medical office, they find the town’s doctor had opened the satellite out of curiosity. Stone and Hall retrieve the Scoop and find two survivors in the town — a sixty-two-year-old man and a six-month-old infant.

The entire team of four core research scientists, including Dr. Charles Dutton and Dr. Ruth Leavitt, are summoned from their academic and research appointments to arrive at a massive, secret, high-tech underground laboratory in Nevada, named Wildfire, where they undergo a full day of decontamination procedures, descending through several disinfection levels of the lab.

After searching with a powerful electron microscope, the team discovers the microscopic life form responsible for the deaths. The greenish, throbbing, new life form is assigned the code name Andromeda. Andromeda kills organisms almost instantly and appears to be highly virulent. While most of the team studies the organism in an attempt to figure out how it works, the team’s doctor, Dr. Mark Hall, tries to find a cure by figuring out why the old man and the baby survived.

Meanwhile Dr. Stone, the creator of the Wildfire Lab, is accused by Dutton and Leavitt of designing Wildfire for purposes of biowarfare research. In another development, unknown to other members of the team, Ruth Leavitt’s research on the germ is impaired by her epilepsy, which is set off by flashing, red computer lights in the facility.

Just as Hall comes up with the answer, Andromeda mutates into a form which degrades synthetic rubber and plastics and thus escapes the containment room adjacent to where Dr. Dutton is doing his research work. Once all the lab’s seals start decaying from the Andromeda germ’s escape, this triggers an automatic self-destruct mechanism designed to set off a nuclear explosion beneath the Wildfire complex, intended to incinerate all infectious agents before they can reach the open environment above.

Hall rescues Leavitt from an epilepsy attack set off by Wildfire’s alarm system. Meanwhile, the team members studying Andromeda have learned the alien microbes – having evolved in the harsh environment of outer space – would thrive on the energy of a nuclear explosion and would consequently be able to mutate into a supercolony of the germ, an action which could wipe out all life on Earth.

Having been entrusted with the only key which can shut down the self-destruct sequence before the five-minute countdown is up, Dr. Hall races against the clock and the lab’s automated defenses to reach a substation before it is too late. Hall endures an attack by automated lasers as he crawls through the lab’s central core, until at last he finds a working substation and disables the nuclear bomb with his key.

Eventually, the scientists realize the latest mutation of Andromeda which is now being carried by weather in the Earth’s atmosphere, will be destroyed by alkalinity when rain carries it into the Pacific Ocean.