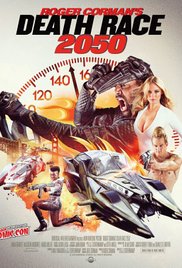 – Roger Corman has made a sequel to his original 1975 movie, Death Race 2000. In an overpopulated future world, the government sponsors the most popular form of entertainment: the Death Race. Competitors race across the country in deadly, souped-up cars, scoring points for every person they kill along the way. The champion racer, Frankenstein, is determined to win again, but his lethal competitors have surprises in store for him.