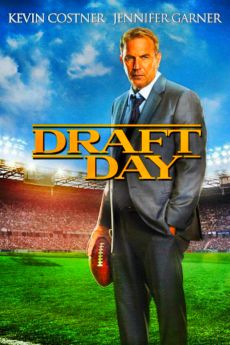 PLOT: On the day of the fictionalized 2014 NFL Draft, the consensus number one pick (as stated by real-life analyst Jon Gruden) is a University of Wisconsin quarterback, Bo Callahan (Josh Pence), the reigning Heisman Trophy winner. Cleveland Browns General Manager Sonny Weaver Jr. (Kevin Costner), whose father coached the Browns, was fired by his son and died a week before the draft, is holding the seventh overall pick. He is given the opportunity to trade for the first overall draft pick, held by a fictionalized version of the Seattle Seahawks (with General Manager Tom Michaels (Patrick St. Esprit) and his boss and owner Walt (Chi McBride). Weaver is also recently aware of the pregnancy of his girlfriend Ali Parker (Jennifer Garner) with his child. Parker also works for the Browns as a lawyer concerned with ensuring the integrity of the Browns' salary cap, and their relationship is intended to be secret from the rest of the Browns staff.

Michaels offers the number-one pick to Weaver, but he declines. However, he later accepts after being told to „make a splash” by Browns owner Anthony Molina (Frank Langella). The Browns thus trade their three first-round draft picks over the next three years to the Seahawks in exchange for the top pick, a deal Michaels believes is good. However, this move angers many Seahawks fans who wanted Callahan to play for their team. They take to social media to express their displeasure with Michaels and publicly demands Walt to fire him for it.

The move also angers Browns head coach Penn (Denis Leary), who had wanted to draft running back Ray Jennings (Arian Foster) for his system offense and the current quarterback, Brian Drew (Tom Welling), who had led the team to a 5–1 start the previous year before being injured. The news leaks after it is tweeted by Vontae Mack (Chadwick Boseman), a defensive player for Ohio State who wants to play for the Browns and who advises Weaver to re-watch the tape of him sacking Callahan four times in one game to see what Callahan does next. Weaver also turns down a proposed trade from the Buffalo Bills, as well as inquiry from the Kansas City Chiefs about the availability of Drew.

Coming into the draft, the only downside to Callahan appears to be two incidents which reflect on his honesty–a 21st birthday party disturbance/robbery ostensibly attended by none of his Wisconsin teammates (despite Callahan’s captaincy), and Callahan allegedly lying to the Washington Redskins about reading a playbook they sent him. When the Browns are „on the clock” with the first overall pick, Weaver sends in the choice of Mack without the rest of the head office’s knowledge. While Drew appears to be relieved of the choice for Mack, Molina furiously leaves the draft in New York City to fly back to Cleveland to confront Sonny. Callahan has what appears to be an anxiety attack and leaves by the back door, having to be coaxed back to the draft by his agent Chris Crawford (Sean Combs).

Callahan steadily drops in the draft and is still available for the sixth pick, held by the Jacksonville Jaguars. Weaver talks the „rookie” GM of the Jaguars (played by Pat Healy) into giving him the sixth overall pick in exchange for the next three years of the Browns' second-round draft picks. Molina comes in furious with Weaver and confronts him for passing Callahan for Mack. He tells his boss that he had his reasons for picking Mack and convinces Molina to let him do his job. Weaver then calls Michaels, who badly wants Callahan, and secures all three first-round draft picks back for the sixth pick, along with Seattle’s punt returner David Putney. Seattle takes Callahan, allowing Weaver to also select Ray Jennings and thus make Coach Penn happy.

The draft is portrayed as a success for the Browns, while opening day 2014 is shown with a visibly pregnant Ali still with Weaver. The team prepares for the game with all Browns players (Mack, Jennings, Drew, and Putney) seemingly in high spirits and ready for the season to begin.

« The Fault in Our Stars
Night Crawlers »