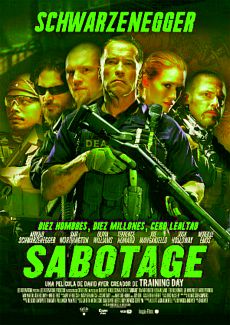 During a raid on a cartel warehouse, in which Smoke is killed, the team steals $10 million from the cartel’s money, hides it in sewer pipes to collect later and split among themselves, and blows up the rest to cover their tracks. However, the money disappears, and their superior Floyd Demel (Martin Donovan) finds out about it and suspends them for several months, during which they are investigated for the theft. With no concrete evidence of their participation, Demel reinstates them. Later, Breacher finds out that Lizzy has become addicted to drugs and that her marriage with Monster is failing.

Pyro is killed when his trailer is rammed by a train, after someone drives it to the tracks while he’s unconscious. Investigator Caroline Brentwood (Olivia Williams) and her partner Darius Jackson (Harold Perrineau) are assigned to the case and interrogate Pyro’s teammates. Brentwood notes Neck is avoiding interrogation, and Breacher accompanies her to his house, where they find him nailed to the ceiling and disembowelled. Brentwood recognizes the execution as the modus operandi of the cartels, leading Breacher to assume the cartel is hunting them down over the stolen money.

Breacher and Brentwood visit Tripod, who left the DEA after being suspended, and find him dead after a shootout in which he killed an assailant whom Breacher identified as a cartel enforcer. Monster later visits Brentwood, who is suspicious of Breacher, and tells her that Breacher’s family was kidnapped by the cartels, who videotaped their murders and later sent the tape to Breacher alongside the severed limbs of his wife and son. Breacher spent months searching for his family’s killers before the team convinced him to move on. Brentwood apologizes to Breacher, and they end up having sex.

Jackson traces the dead enforcer’s cellphone to a cartel safe-house, which is raided by Breacher and his team. However, the enforcers are not there. They are later found dead at the bottom of a river near Tripod’s house, and Brentwood realizes that they were killed before Pyro and Neck, meaning someone is framing the cartels of targeting the team. Breacher reunites the team to tell them what happened, and Lizzy lashes out and reveals she’s been having an affair with Sugar. Grinder later confesses to Brentwood that they stole the money. Breacher meets with Grinder to discuss what’s next when Grinder is shot dead by Lizzy, who is behind the murders alongside Sugar. Lizzy then meets with Monster to discuss her escape. Monster destroys her passport and Lizzy slashes him with a knife, killing him.

Breacher and Brentwood go to Lizzy’s house and find Monster stuffed in a refrigerator. Lizzy calls Breacher, pretending to be alone, and arranges a meeting at a parking garage. Breacher goes there with Brentwood and engages in a shootout with Lizzy and Sugar, who attempt to escape but following a car chase through the city’s streets end up crashing into a truck, decapitating Sugar. Breacher and Brentwood confront a dying Lizzy, who accuses the team of stealing the money behind their backs, causing her to swear revenge. Brentwood is puzzled, assuming Lizzy had stolen the money. Breacher tells the dying Lizzy that he took the money. Lizzy tries to reach for her weapon and Breacher kills her. Breacher tells Brentwood to be „a good girl and walk away.” The local cops arrive and Breacher disappears.

Weeks later, Breacher is in Mexico, where he uses the stolen money to bribe a corrupt police officer into helping him identify the man who murdered his family. Breacher finds him in a Mexican bar and kills him and others loyal to him in a violent shootout, during which he is shot in the chest. Having avenged his family, a mortally wounded Breacher sits at a table, takes a shot of whiskey, lights up one last cigar and smiles grimly.

« The Spirit : Duch miasta
The Quiet Ones / Uśpieni »