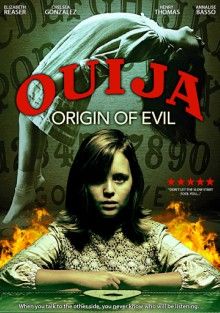 –  Set in 1965 Los Angeles, a widow named Alice Zander works out of her suburban home as a spiritual medium, accompanied by her daughters, 15-year-old Paulina „Lina” and 9-year old Doris; although they stage their seances, Alice’s real intent is to help people move on. The family is still reeling over the recent death of Roger, Alice’s husband and the kids' father. After Lina suggests that Alice incorporate a Ouija board into her readings, Alice does so, and unknowingly contacts a spirit named Marcus that begins to possess Doris. They play in a graveyard which is breaking one of the three rules: never play alone, never play in a graveyard, and always say goodbye.

Alice receives a foreclosure note, meaning they may lose their house. Doris contacts the board for help, believing she is communicating with her dead father, and the spirit leads her to a secret compartment behind the basement wall containing a pouch of cash. When she gives the money to her mom, the family has a Ouija session, believing they can contact Roger. When the board answers a question only Roger would know the answer to, a thrilled Alice begins believing that they are in contact with her dead husband.

Soon, Doris becomes possessed by a shadowy spirit. Lina, who is becoming disturbed by the changes in her sister, finds papers written by Doris in fluent Polish, a language she does not know, and brings them to Father Tom to translate. Troubled, Father Tom visits them for a Ouija session under the pretense of contacting his dead wife Gloria. Although the session appears to be successful, Father Tom later explains to Alice and Lina that Doris did not contact Gloria; she never was. Instead, for every question he asked, she read his thoughts and repeated the answers he was thinking in his mind. He reveals that the pages are entries written by a Polish immigrant named Marcus, who was taken captive during World War II by a sadistic doctor who conducted experiments on him and other captives inside the house’s basement. These spirits knew answers that only Roger would know because they have been watching the family since the day they moved in.

Meanwhile, Doris kills Lina’s boyfriend Mikey and she hangs his body. Upon seeing this, Father Tom, Alice, and Lina burn the Ouija board downstairs. When Father Tom discovers skeletal remains in the basement wall, they realize that they have been using the Ouija board in a graveyard all this time. Father Tom finds the secret room where the experiments were conducted, and is possessed by the spirits. He attacks Alice and Lina, but momentarily seizes clarity, only to be killed by Doris. Alice is captured, while Roger’s spirit carries an unconscious Lina to her bed. Lina wakes up and recalls an earlier moment where her doll’s mouth was stitched by her father’s spirit „to shut out the voices”, realizing that she must sew Doris' mouth shut to quiet the spirits' voices and stop the evil. During the struggle, she successfully sews Doris' mouth shut and Doris dies, reuniting with her father. After this, Lina is temporarily possessed and stabs Alice. While dying, Alice sees Roger and Doris together, and happily joins them, leaving behind a sobbing Lina.

Two months later, Lina remains committed in a mental hospital for the suspected murder of her mother. She is interviewed by a doctor and is unable to say what happened to Doris' body, but states that she, Lina, will never be alone again. She tries summoning her sister inside her cell and the doctor watches, unbeknownst that the possessed Doris skitters across the ceiling towards him. In a post-credits scene set in the present, a now elderly Lina remains in the asylum and receives a visit from someone claiming to be her niece.