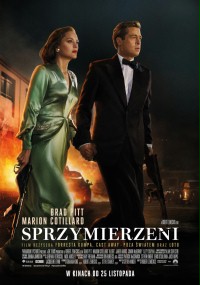 plot – In 1942 during World War II, Royal Canadian Air Force intelligence officer Max Vatan travels to Casablanca in French Morocco to assassinate the German ambassador. He is partnered with a French Resistance fighter named Marianne Beausejour, who had escaped from France after her resistance group was compromised and killed.

The two pose as a married couple and grow close, despite agreeing that in their line of work feelings can get people killed. Marianne, who is trusted by the Germans, secures Max an invitation to the party where they plan to conduct the assassination. On the day itself, they make love inside a car in the middle of a desert sandstorm, knowing that they might not survive. However, the mission goes well and they both escape. Max asks Marianne to come with him to London and be his wife. The two get married, settle down in Hampstead, and have a baby girl named Anna.

A year later, Max learns from the Special Operations Executive that Marianne is suspected of being a German spy, having adopted her identity after the real Marianne was killed in France. In order to test their suspicions, SOE run a 'blue dye' operation: Max is ordered to write down a piece of false intelligence at home, where Marianne can find it. If the information is picked up from intercepted German transmissions, Max must personally execute her, or be hanged for treason. Max is told otherwise to act normally.

Defying orders, Max visits a former colleague Guy Sangster who knew Marianne but, blind from a wartime injury, cannot confirm her identity. He reveals that the resistance fighter Paul Delamare worked with Marianne in France and would be able to identify her. Max seeks out a young pilot named George Kavanagh, gives him a picture of his wife, and instructs him to ask Delamare whether she really is Marianne. However, the following night, Max hears that Kavanagh was killed whilst waiting on the ground for the answer. He also hears that the whole operation might be a test, before he is given a big job in the run up to D-Day.

The following night Max takes the place of a Lysander pilot and flies to France to meet with Delamare, who, it transpires, is being held at the local police station. Max and the resistance break into the jail to confront Delamare. He is drunk, but remembers that Marianne was a beautiful pianist.

Back in England, Max takes Marianne to a local pub and demands she play the piano. Marianne cannot play, and admits she is a spy. She claims her feelings for Max are genuine and that she and her child were being threatened by German spies in London, including the woman who lives around the corner and often looks after Anna.

Max, unwilling to kill his wife, tells her they need to leave before the SOE catches them. He kills Marianne’s handlers before trying to escape from the airfield, but they are intercepted before they can board a plane. Marianne tells Max that she loves him, asks him to take care of Anna, then shoots herself. The commanding officer orders the soldiers present to report that Max executed Marianne as per his orders, so that Max himself will not be punished.

After the war, Max moves to the ranch in Canada that was always his ambition, and raises Anna. The film ends with Marianne reading the letter that she had earlier written to her daughter, anticipating that one day her real identity would be uncovered.

« Adams, Gyllenhaal, Shannon
I Don’t Feel at Home in This World Anymore »